‘This is the moment,’ Opposition Leader tells NDP supporters 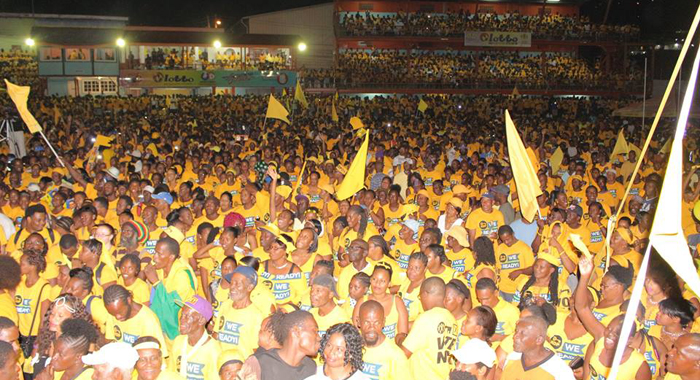 Opposition Leader Arnhim Eustace Saturday night promised supporters of the main opposition New Democratic Party that if elected the party will turn around the Vincentian economy and improve the lives of all citizens.

He said that the moment the nation has been waiting for has arrived as Vincentians prepare to elect a new government on Wednesday.

“NDP! Can you feel it?” Eustace said to loud chants from the thousands of party supporters gathered at Victoria Park as the NDP held its last major rally heard of the polls.

He said the moment has come “when women and girls will rise again; the moment when we open wide our young people’s minds so that they do not feel affronted by the new ways of doing, thinking, and being;

when we govern ourselves and put in positions of authority, only those who will best serve the national good,” Eustace said.

The time has come “when we re all Vincentians, rather than perpetual party supporters; when we take care of every Vincentian’s health and wellness, when we stop begging and return to producing, when we celebrate trade deals rather than aid, when we safeguard democracy, not only through free and fair election, but by protecting freedom of expression.”

Eustace is making his third attempt to return the NDP to office, almost 15 years after it 17-year stint in governance ended with a Unity Labour Party voted in March 2001, six months after Eustace took over from NDP founder, former prime minister James Mitchell.

Eustace, an economist, has spent the last 15 years trying to convince the electorate that the Gonsalves administrations have mismanaged the economy.

His message seems to have gained traction as a recent ULP poll found that 58 per cent of persons surveyed said they were very concerned about joblessness and the state of the economy.

“I — and my colleagues — are humbled by the task ahead, but undaunted by the responsibility of running the affairs of our country after December the 9th. We are ready, and we are willing, competent and qualified, our team, which I speak about all the time has ten bachelor’s degrees, nine master’s degrees and three PhDs. we have three farmers, six educators an economist, two lawyers, a political scientist, two musicians, two human-resource specialists, seven entrepreneurs, a civil engineer, three sportsmen, a landscaper, an accountant, and even a winemaker that is our team. That is our team — the team that will take our country forward into brighter and more prosperous days.”

“I will qualify that by highlighting the fact that those initial seven years of feast were the ULP harvesting the economic seeds sown and carefully germinated by the preceding NDP,” Eustace said.

“The depressed state of our economy over the last seven years, with four consecutive years of negative economic growth and three years of low economic growth, and a current deficit of 133.9 million dollars for 2015, contrast sharply with the 17 years of NDP when over that 17 years, we had a surplus every single year in our current account averaging 5.8 per cent of the gross domestic product of this country.

“With the introduction of Gonzinonmics — that discipline brought about by Ralph Gonsalves — our unemployment skyrocketed due to poor fiscal and economic management, particularly for our country’s youth, who are coincidentally our greatest resource.”

Eustace told party supporters that addressing the situation “would require the incoming NDP administration, to make major decisions with respect to all of our economic sectors, in particular, agriculture, tourism, construction, information technology, health and education, and international trade”.

He said that even the ship’s registry — under which many nations use flags of convenience — will become a great source of employment for Vincentians, noting that 3,873 ships currently fly the Vincentian flag.

“We will cut back VAT on 150 items and remove VAT from electricity, thus improving the competitiveness of our economy.

“We have already indicated to you that we will establish a ministry of the private sector, which will increase employment, especially in relation to small enterprise and entrepreneurship.”

He said the NDP’s proposed development bank is an important component of the NDP’s plan to turn the economy around.

“Our manifesto which you all should have by now, details many other initiatives aimed at improving our economy and decreasing unemployment. These include proposals for youth, sports, and culture.

“I look forward, to the day we shall all usher in together, and the signs will be undeniable and prolific, young people will walk with shoulders high and make direct eye contact. They with prize information over rhetoric; answers over spit; women will take back their power, and say a loud ‘no’ to the compromises many in authority demand of them,” Eustace said.

“Corruption, where it is found, whenever and wherever, whomever may practice it, it will be routed. Jobs will be in the offing as the private sector is revived and given room to flourish; the exodus from farming will be reversed. Scholarships will be distributed on merit and will not require a visit to the Prime Minister’s office. Parents will no longer have to choose between paying for their children subjects, and feeding them because we will pay for the subjects,” Eustace said.

“I thank you and may God bless you all,” Eustace said.

Political observers say that Wednesday polls will be a straight race between the NDP and the ULP.

Amidst declining support in each election since coming to office in 2001, the ULP is seeking an unprecedented fourth consecutive term in office for a Labour government in SVG.

3 replies on “‘This is the moment,’ Opposition Leader tells NDP supporters”