Jamaican politician urges youth to give ULP a fourth term 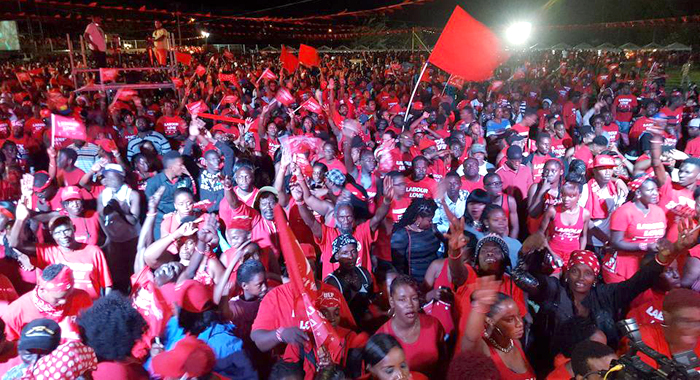 A section of the crowd at the ULP rally in Cumberland on Saturday. (Photo: Anthony Dennie/Facebook)

Jamaica’s junior minister in the Ministry of Tourism and Entertainment, Damion Crawford, on Saturday sought to boost the chances of his university friend, Carlos James, and the Unity Labour Party ULP) in Wednesday’s general elections, telling the party’s youth rally “when you say you want change, be careful, because you might change for the worst.”

Crawford told the campaign rally in Cumberland, North Leeward, which James, a first-time candidate is contesting, that some persons dressed in yellow — presumably opposition supporters — had asked him why he had come to St. Vincent.

“They say what you’re doing here? You have nothing to do with this. I said, ‘I am here because when I ask the question ‘Who am I?’ I am you.

“I am you because when a hurricane come to St. Vincent I start fret about when it come to Jamaica, because we have the same risks,” Crawford said.

He said that the faces in the crowd are those of his relatives.

He said that he told the questioners that he was in St. Vincent because he is one of the first persons in Jamaica that met James.

“And I hear all kind of foolishness ‘bout he is foreigner. When he was in Jamaica, we called him Vincy,” Crawford said of the Trinidad-born James, who studied media and communication in Jamaica then went on to read law in London.

The visiting politician said that voters have said that Gonsalves, who was first elected in 2001, has been in office for too long.

“How can it be a bad thing to be committed to your country? Because Ralph ain’t no fool. Ralph can make million all over the world, and Ralph decide that he is staying with his people.”

Crawfrod said those who say Gonsalves has been in office for too long are like a person who says they don’t like another because they tell too many truths.

“Yo’ don’t like a girl because she is too kind. How can you not like a man because he is committed to his people,” Crawford said.

He asked the audience to carry back a message on his behalf “that when you say you want change, be careful, because you might change for the worst.

“And so, change don’t mean change ah government. It means change of circumstances.”

Crawford said that the persons he interacted with told him he did not know anything about St. Vincent.

He said he would, therefore, talk about what he knows. He told the audience that he holds a master’s degree in tourism and lectured in the discipline for seven years at the University of West Indies.

He said he almost made five stops on his way to St. Vincent from Jamaica, adding that there is no way he will make four lay-overs from one destination to another if he and his family were travelling.

“And so, when you have an airport, yo’ plane can come straight from New York.”

He said that tourism is designed as the travel and staying outside of one’s home destination.

“If you cannot travel, how the hell you going to stay? And so, when you hear a man say him interested in tourism but him nah build no airport and him nah build no seaport — people cannot walk to St. Vincent.”

Crawford mentioned the 1,500-room hotel that the ULP says will be built soon and said that every hotel room needs 1.2 workers.

“But it also need tomatoes, it also need yam. So, every youth here who is a farmer, make sure you look at the 2 per cent loan. I never hear of a loan for 2 per cent in my life, that is change,” he said in reference to loans under the state-owned Farmers Support Company.

“In North Leeward, understand say every room use two tomatoes a day. So, if you want to go into tomato farming, start now,” he said, adding that every hotel room uses six eggs a day.