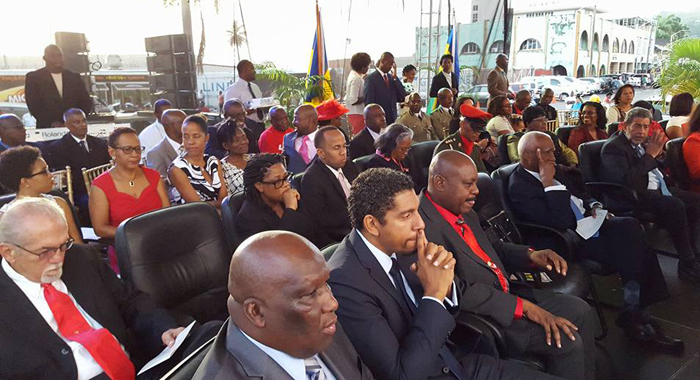 Prime Minister Ralph Gonsalves, far right, members of the Cabinet and other person on the platform at Monday’s event. (Photo: Lance Neverson/Facebook)

“It must be affirmed, particularly to the supporters of the ULP (Unity Labour Party), that our electoral triumph, our victory, must not in any way engender in us a sense of triumphalism,” Gonsalves said as the Cabinet was sworn in at Heritage Square in Kingstown.

The Cabinet shows a mixture of experience and newcomers, including women, with two relatives of Prime Minister Ralph Gonsalves again being given ministerial appointments.

Gonsalves retains ministerial responsibilities for Finance, the Public Service, National Security, Grenadine Affairs, and Legal Affairs, while his son, Camillo, who was elected to office for the first time, has been given the responsibility for Economic Planning, Sustainable Development, Industry, Trade, Information and Labour.

The younger Gonsalves had served as senator and foreign affairs minister in the previous administration.

The Prime Minister’s cousin and ULP general secretary, Julian Francis, has been appointed a senator for a fourth consecutive term, and holds ministerial responsibilities for Transport and Works, Urban Development and Local Government.

But probably the biggest shocker at Monday’s swearing ceremony held at Heritage Square in Kingstown was the announcement of Senator Luke Browne as Minister of Health Wellness and Environment.

The young politician was first appointed a senator in August 2013.

Browne failed for a second time to unseat Leader of the Opposition Arnhim Eustace in East Kingstown, although his performance in the Dec. 9 general election was a marked improvement over 2010.

Browne, a national scholar, was a parliamentary secretary in the Ministry of Tourism, Sports and Culture in the last government.

Sir Louis Straker, who came out of retirement to contest the Central Leeward seat, which he has represented from 1994 to 2010, has been again named Deputy Prime Minister.

He also is also Minister of Foreign Affairs, International Trade and Regional Integration.

MP for North Windward, Montgomery Daniel, who like Gonsalves has been in government since the ULP first came to office in 2001, has been returned to the Ministry of Housing, Informal Human Settlement, Lands Surveys, and Physical Planning.

Cecil “Ces” McKie, who was re-elected to a second term as MP for West St. George, retains his post as Minister of Tourism, Sports and Culture.

Saboto Caesar, MP for South Central Windward, is at the helm of the Ministry of Agriculture, Forestry, and Fisheries, and Rural Transformation, a continuation of his last assignment.

Newcomer to politics and the Cabinet, St. Clair “Jimmy” Prince, former head of the state-owned Agency for Public Information, will lead the Ministry of Education, Ecclesiastical Affairs and National Reconciliation.

Deborah Charles, another political newcomer, joins the Attorney General Judith Jones-Morgan, as the females in the Cabinet.

“It was important that I find parliamentary space for this woman of extraordinary quality,” the Prime Minister told the ceremony.

Charles, a former teacher who failed to unseat the main opposition New Democratic Party’s (NDP) Daniel Cummings in West Kingstown, has been appointed a senator and Parliamentary Secretary in the Ministry of Education, Ecclesiastical Affairs and National Reconciliation.

Gonsalves reminded listeners that the Constitution only allows for two senators to be ministers.

He said political newcomer, Carlos James, who came within 12 votes of winning the North leeward seat, has also been named a senator and will be proposed as Deputy Speaker of the House of Assembly when the House meets on Dec. 29.

Jomo Thomas, a first-time candidate who failed to wrestle South Leeward from the NDP’s Nigel “Nature” Stephenson, will be proposed as Speaker of the House of Assembly.

The ceremony came at the end of a day in which NDP supporters protested in Kingstown and blocked one of the main streets, which was cleared by police shortly after.

The NDP, citing irregularities, has rejected the results of the election and says it will take the matter to court.

A lawyer for the party said around 4 p.m. that the party will file documents with the court on Tuesday.

As the ceremony got underway at 4:30 p.m., NDP leader Arnhim Eustace other election candidate and supporters continued to protest the street outside the Financial Complex, where the Office of the Prime Minister is located.

Prime Minister Gonsalves noted the NDP rejection of the results.

“We ought to recognised that the ecstasy of victory should be tempered by the realisation that St. Vincent and the Grenadines belongs to all of us, whatever our respective political party affiliation,” he told the ceremony, which included a large number of persons dressed in election campaign t-shirts.

Gonsalves said it is inevitable that competitive, democratic politics engender political partisanship “but such partisanship must be kept within reasonable limits and be seasoned by mature reflection and action.

“It ought never to degenerate into naked divisiveness and dog-eat-dog impulses. Intolerance, bile, and hatred have no part to play in the mature competitive politics of our Caribbean civilisation,” Gonsalves said.

“Raw ambitions, unrestrained personal agendas and a refusal to accept the reality of the declared election results constitute a combustible mix, if directed by irresponsible men and women. I offer unsolicited but honest advise to the NDP leadership that if you continue like this, it would only result in your accelerated political demise, a veritable political oblivion.”

Gonsalves said the only place for the adjudication of an election is the court of law, not the streets.