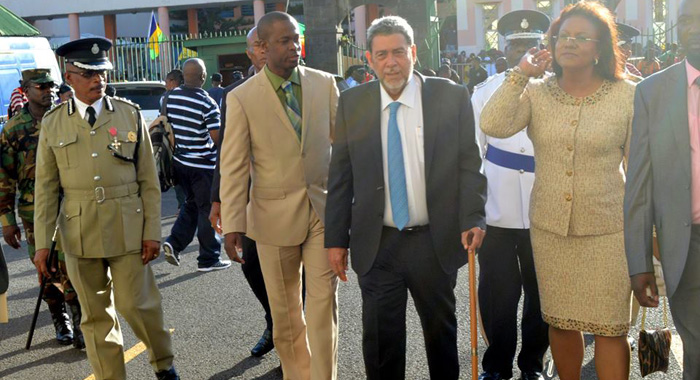 Prime Minister Ralph Gonsalves this week downplayed what he said was an injury to his ankle and hamstring, which resulted in him walking it a cane.

“Well, I had indicated today: I went of Dominica and injured my ankle and my hamstring,” Gonsalves told reporters when asked on Monday why he was walking with a cane.

“The only impediment is that it has restrained me from doing the Comrade Skank,” the 70-year-old leader said during the brief interview as he prepared to enter the House of Assembly for the Opening of the 10th Parliament.

The “Comrade Skank” is a dance popularised by Gonsalves’ Unity Labour Party (ULP) during the recent election campaign.

It is based on Gonsalves’ dance moves.

It was pointed out to the Prime Minister in the interview that the most recent leg injury is about the third that he has suffered in recent time.

Asked if he is not concerned about this, Gonsalves, who was elected to a fourth term in office in the Dec. 9 general elections, said:

In September, Gonsalves travelled to Cuba for treatment for an injury to his right thigh.

In April, doctors ordered Gonsalves to rest as a result of an ankle injury, the Prime Minister said he sustained in his bathroom.

In July, Gonsalves was seen walking with a slight limp, and told reporters that he had injured his knee, but added that the injury was not a serious one.