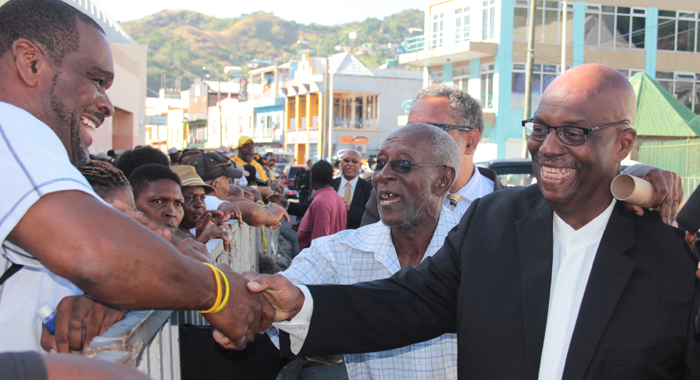 Eustace also used his weekly radio programme to encourage party supporters amidst what he said is a “gloomy” period for the 40-year-old institution that has been in opposition for almost 15 years, after 17 years in government.

He noted that the party has not lost any elections petition and pointed out that they were filed on Dec. 30, two days after a High Court denied NDP candidate for Central Leeward, Ben Exeter, access to certain election documents.

“They (petitions) weren’t event filed when the court ruled against this other matter.

“The real election petitions — the meat of the matter, the fraud and the theft, the way ballots were dealt with — all these things are being dealt with by the petitions. Not the case that we had a couple weeks ago,” he told listeners.

The NDP is claiming that it won the Dec. 9 general elections, which electoral officials says were won by Prime Minister Ralph Gonsalves’ Unity Labour Party (ULP).

‘petitions … can lead to a by-election’

Election officials say the ULP, secured a fourth term in office by winning 8 of the 15 parliamentary, while the remaining 7 went to the NDP, a carbon copy of the December 2010 elections results.

Eustace said that the outcome of the petitions could see the ULP administration falling.

He said that the NDP has a few more days to file some affidavits in support of the petitions.

“And over time, we will be giving you information to the extent that it is possible, of what is happening with those election petitions,” Eustace told listeners.

“What we lost a few weeks ago had to do with the right to remove all the ballots from the Supervisor of Elections office to the court — the Registrar of the High Court,” Eustace noted.

“And that matter, of course, will come up again in the petitions,” he said, adding that the election petitions are not affected by the Dec. 28 court ruling.

NDP will not spend ‘any real time in Parliament’

Eustace said NDP officials met Monday morning and decided to “continue the process in terms of our meeting, rallies and the different things we do in terms of protesting the results”.

He reiterated that the NDP does not recognise the ULP administration as a legitimate government and the meeting discussed how the party will operate in Parliament.

“You can be out of Parliament and go into Parliament for five minutes and be out ten minutes later. So, we know what the rules are and we will be dealing according go the rules. But we’re certainly not going to spend any real time in Parliament,” Eustace said.

“I want people to understand that clearly. Our concentration will be on the case and the protests that are needed, as we see it. We were doing some fine-tuning to that protest today.”

Eustace said party supporters should not be afraid.

He said that some persons have said that the NDP should accept the results of the elections.

“There are a lot of people who don’t really have the kind of confidence in our justice system that we should have, or what you should expect in a democratic society.”

He said this is not a recent development, adding, “A lot of that confidence was eroded before today.

“And when you make statements that ‘oh, you have to come back to Papa’, what is that telling the people,” Eustace said, quoting a statement by Prime Minister Ralph Gonsalves some years ago.

“What are you telling the public? These are the kinds of issues,” Eustace said.

‘we are not letting it pass’

He said that some persons have said that it is true the elections were stolen but the NDP should accept the results. “That is foolishness,” Eustace said.

“The kind of corruption we have in the system here now, our system will collapse if it continues as is. Not only the system — the parliamentary system — will collapse, but our economy will also collapse, and that is what our people live by. Our values are collapsing because you now begin to accept wrong as right,” Eustace said.

He told listeners that ignoring what the NDP says is the theft of the election will erode the system.

“All you have is a corrupt process. And those who try to hide behind it with ‘It done gone so’, what’s wrong with them?” Eustace said.

“Those who should be speaking out, everybody trying to give an excuse. But they admitting it’s wrong, you know – ‘But ‘let it pass’

“Well, we are not letting it pass,” he said, noting that when the government wanted to increase the number of seats from 15 to 17 in 2010 and the NDP went to court over the decision, people said that the government would win the case, but the NDP triumphed.

“So, don’t give up hope. We have to keep the issue constantly before the people of this country to ensure some victory for us at the end of this process.”

Eustace said the NDP has to do the legal and political work which give support to ensure a judgement in the party’s favour.

He said it a normal human reaction for persons who have worked hard on behalf of the NDP to be hurt about the outcome of polls.

“But when you don’t get through because the other side stole, that’s a different matter. That you can’t take and that you should not talk, hence the reason for going to court and for protesting.”

“And I am telling you, because of this, we will pay a much heavier price in terms of our economy, because of what has happened here,” Eustace said.

“Our name, in many countries now, is associated with corruption. That has impact on people coming to invest in our country.”

He said the issue that the NDP is dealing with is “serious and very fundamental”.

“It is no fly by night matter. At risk is the heart of all our population for the benefit of one or two people who have become extremely wealthy off the back of the majority of the population of St. Vincent and the Grenadines. And that you will hear more about too,” Eustace said.