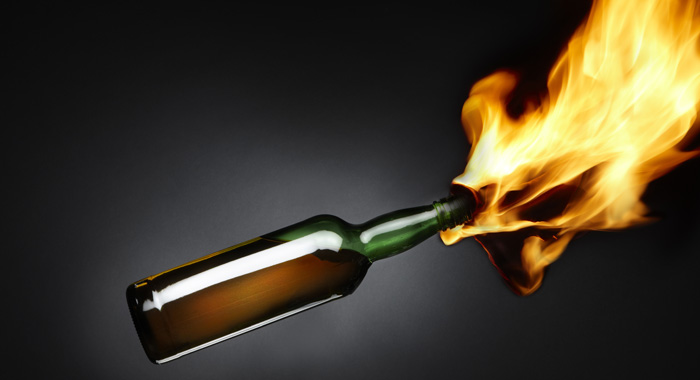 An example of a a Molotov cocktail (flambeaux).

Police have over the past four days responded to what they say are two attempts by person(s) to firebomb the St. Vincent Electricity Services Ltd (VINLEC) head office at Paul’s Avenue, Kingstown.

On Monday, at 12:25 a.m., members of the Royal St. Vincent and the Grenadines Police Force responded to a report that a suspicious material appearing to be rubber was seen burning on VINLEC’s Paul’s Avenue compound. When the police arrived, charred remains of a cloth-like material and fragments of burnt bottle were also found lying on the grass in the yard. There was also odor of flammable fumes coming from the fragments.

This comes on the heels of a similar incident, which took place on Friday, when a security guard at VINLEC’s Paul’s Avenue compound discovered a Molotov cocktail (flambeaux) of pieces of broken bottles and a cloth-like material on the ground behind VINLEC’s office building. The odor of kerosene also came from the bottles.

“The police view these incidents seriously and give the assurance that they will be thoroughly investigated,” police said in a statement on Monday.