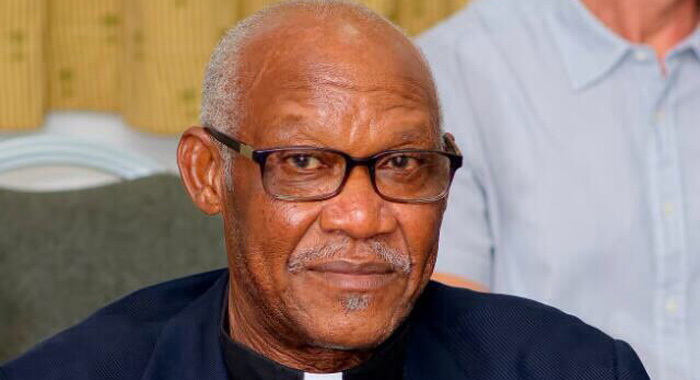 The Diocese of the Windward Islands announces the passing of The Very Rev’d Patrick Ezekiel McIntosh M.A., CMG, Dean of the St. George’s Cathedral, who died on Tuesday  Jan. 5, 2016.

He is a 1997 graduate of the University of Birmingham where he obtained a Master’s degree (Sponsored by the United Society for the Propagation of the Gospel — USPG).

McIntosh studied for the Priesthood at the Barbados-based Codrington College from 1974 to 1977. Since his ordination he has served the Diocese for 38 consecutive years.

At the time of his death he was Rector of the Parish of St. George and St. Andrew and Dean of St. George’s Cathedral from July 2002; Chaplain to the Mothers’ Union and Anglican Church Women Association (ACWA) in the Archdeaconry of St. Vincent and the Grenadines and Chaplain to the Anglican Youth Movement for several years.

He was also Chairman of the Governing Body, Bishops’ College, Kingstown; Member of the Incorporate Trustees of the Anglican Church in St. Vincent and the Grenadines; Diocesan Board of Finance and Diocesan Council; Diocesan Representative to Provincial Synod of the Church

“Dean Mc Intosh was a very faithful, dedicated and committed priest in the Diocese of the Windward Islands. He was always willing to go beyond the call of duty. While he was Rector of the Parish of the Holy Trinity, Georgetown, he paired up with the then Fr. Leopold Friday Priest in Charge of the Parish of St. Matthew, Biabou to carry out a Lay Training Programme for members of both Parishes. In 1996, The Rt. Rev’d Sehon Goodridge (now deceased) Bishop of the Windward Islands asked him to extend the Programme to the Archdeaconry of St. Vincent and the Grenadines and Fr. Mc Intosh (at the time) was one of the main facilitators of the Programme in spite of the extensiveness of his ministry in the Parish of the Holy Trinity, Georgetown which extends from Mt Grenan to Fancy.”

Dean Mc Intosh will be remembered for the construction of the Holy Name Anglican Church, Sandy Bay, St. Vincent and the Grenadines, one of the two churches in the Diocese which was built after 1960. One also recalls the restoration of the Holy Trinity Parish Church and rectory during his tenure as Rector there, for over seventeen years.

“There were several occasions when Dean Mc Intosh risked his life to serve the people in the Parish of the Holy Trinity. He would tell stories of crossing the Rabacca Dry River when it was flowing and just making it across in the nick of time or on occasions had to be assisted by others.”

“Dean Mc Intosh had a great love for God and the Church, he saw himself as one called by God to mission and ministry, and executed his ministry with a deep passion. He had a love for people generally and particularly for the shut-ins, the aged, sick, poor and less fortunate and he introduced a monthly service for them at the St. George’ s Cathedral several years ago.”

Just before his passing he was working assiduously towards the restoration of the St. George’s Cathedral.

He leaves to mourn his wife Carmel and children Camille and Patrick Jr. and his son in law The Rev’d Fr. Hanif Johnson, other relatives and friends.

“The Diocese is truly saddened by his death”

Rest eternal grant unto him O Lord, and let light perpetual shine upon him. May he rest in peace. Amen