Do Eustace and the NDP really love SVG? 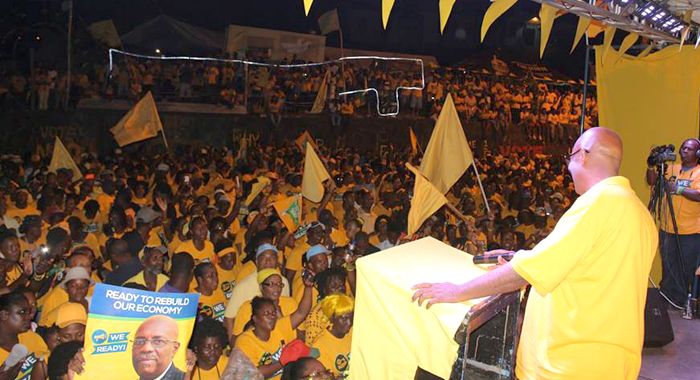 As I contemplate on events that took place prior to the general elections and events that are taking place presently, this question comes to mind. I know the answer to the question is largely dependent on one’s political views. However, it is my intention to present some arguments that will help us to arrive at a more conclusive answer concerning the question. It is my hope that we can engage in an enlightening and objective discussion.

The NDP has already challenged the elections results in court. Why not wait on the court proceedings to take place? Why decide to embark on creating social unrest in the country? Have Mr. Eustace and his supporters considered the negative image that is being portrayed of our beloved country at home and abroad simply because he and others in his party decided to take certain actions to satisfy their lust for power?

I know that some NDP supporters will say that this is a deliberate strategy. However, they need to take into consideration the negative image and negative impact their actions can have on the economy. For example, the unstable political climate that they are trying to create can act as a deterrent for foreign direct investment, thus, further hindering the growth of our economy. Mr. Eustace, being an economist, will know this. Therefore, because of these adverse effects, I am asking Mr. Eustace to please reconsider this strategy. His acceptance or rejection of this advice, will tell me how much he really loves this country.

The other point I will like to make, Mr. Editor, is that I have been living in this country all of my life and in my opinion, it is a pretty safe place to live. Therefore, I am always appalled when I receive telephone calls from persons in the diaspora inquiring about my safety and the general safety of St. Vincent and the Grenadines because of something they saw on the Internet. I always give them the assurance that our country is pretty safe, despite the actions of a minority group who may want to portray otherwise. To this group of people who seems intent on creating chaos, how can you claim to love this country when your every action says otherwise? You need to bear in mind that the Internet is a tool that is very far reaching. It is also a source of news to people living in the diaspora; and very often, what they see, is what they believe. Therefore, I am asking, if you love this country as much as you claim, why would you want to create a negative image of it to the outside world?

This type of behaviour reminds me of the Biblical story of the woman who lost her child and decided to take her neighbour’s child. They went to King Solomon to settle the dispute and Solomon decided to cut the child in half and present each lady with a half of the child. Of course, the lady who wasn’t the mother of the child agreed to this while the real mother decided to forfeit the right to her child in order to prolong its life. Is the intent of the NDP and their supporters geared toward destroying St. Vincent and the Grenadines at all cost simply because they lost the elections? I do hope this isn’t the case.

In my opinion, the NDP would have to do some deep introspection and make some hard decisions. One of the decisions they will have to consider, as paradoxical as it may seem, is the issue of leadership. Do they continue with Mr. Eustace as leader even after he led them to four consecutive Electoral defeat? In my opinion, Mr. Eustace’s push to encourage social unrest at this time is an attempt at attaching some relevance to himself while at the same time distracting from the substantive matter, which happens to be his weak leadership style.

5 replies on “Do Eustace and the NDP really love SVG?”