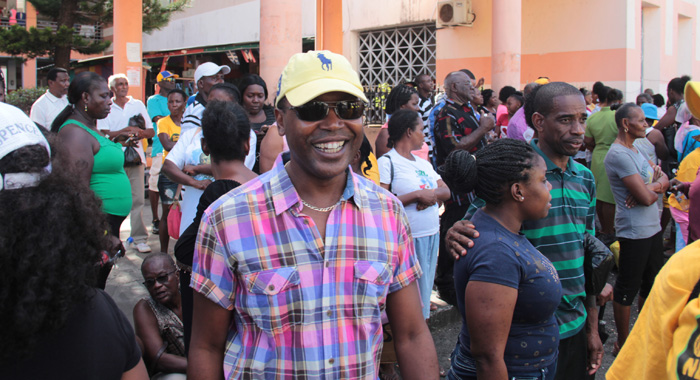 Opposition politician Ben Exeter was on Thursday charged with carrying an offensive weapon without lawful authority.

The charge is the fourth stemming from his Dec. 29 arrest in Kingstown, where the opening of the 10th Parliament was taking place.

Exeter was the main opposition New Democratic Party’s (NDP) candidate for Central Leeward in the Dec. 9 general election, which the NDP is claiming that the Unity Labour Party (ULP) “stole”.

Kay Bacchus-Browne, one of Exeter’s lawyer, told iWitness News that the charge is “ridiculous”.

She accused the police of acting after Prime Minister Ralph Gonsalves said last week Thursday that it is an offence to carry a licensed firearm to a public meeting.

Gonsalves, a lawyer and Minister of National Security, cited the Public Order Act in making his case, but said he was not commenting on any particular incident.

Taking a licensed gun to a public meeting is illegal — PM

Bacchus-Browne said that Exeter was charged with “carrying what they call an offensive weapon without lawful authority”.

“It is a stupid charge. I intend to have a press conference on Monday and call in the press and talk about it. My interpretation of that is exactly that Ralph Gonsalves gets on the radio, talks crap, and everybody follows it…” the lawyer told iWitness News.

Exeter was arrested in Kingstown, where NDP and ULP supporters had gathered in protest and support as the opening of the 10th Parliament took place.

He appeared in court on Dec. 30 and pleaded not guilty to assaulting a police officer, resisting arrest and assaulting Granville De Freitas of Chester Cottage, causing actual bodily harm.

Bacchus-Browne said that it was not the first time that police were acting after Gonsalves commented publicly on a matter.

“In the case with Ordon Graham, Ralph gets on the radio and talks — follow-up. The same thing with Lynch — follow-up,” she said.

Graham is a former member of the SVG Green Party and Lynch is deceased, former host of the NDP’s daytime radio programme.

She contrasted the response of the state to its response to an incident in which Carlos James, the ULP’s candidate for North Leeward in the Dec. 9 general elections, discharged a firearm in Petit Bordel last November to quell what he said was a “rain of missiles” that NDP supporters were showering on ULP supporters at a ULP event.

“So clearly, it is political harassment and I would like the comparison with Carlos James,” Bacchus-Browne said.

“He (Gonsalves) gets on the radio, or wherever he was, and says what he has to say and then the police just follow on because Ralph is a lawyer,” Bacchus-Browne said in reference to the Prime Minister’s press conference last week.

“It is ridiculous. I saw the charge and I call it a ridiculous charge. Just take the logical step, it means that anybody who goes to any public meeting with a firearm can be charged and it becomes an offensive weapon because it is a public meeting. Can that make sense?” Bacchus-Browne said.

She told iWitness News that she does not think that the charge should stand up in court “on an even playing field”.