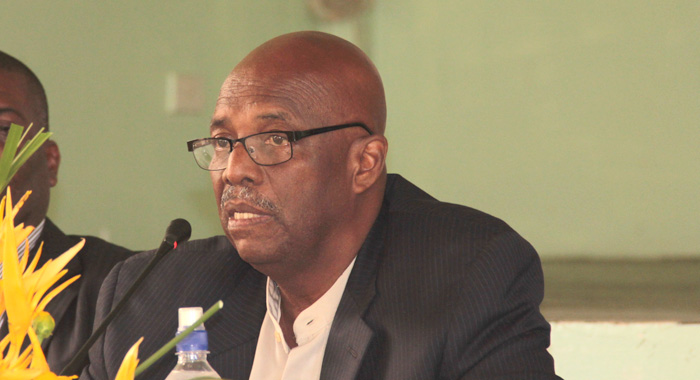 Leader of the Opposition Arnhim Eustace says that the EC$912 million Estimates of Income and Expenditure for 2016 that will be presented in Parliament today (Friday), contains a Recurrent Revenue deficit of EC$151 million.

“You don’t have $912 million in here you know. You have it written in here, but it is not” he said Thursday of the Estimates document, adding, “because when you look at the taxes you collect, very often it’s not enough to even carry one-half of the expenditure.”

He told New Democratic Party (NDP) press conference in Kingstown that it should be noted that the Capital Estimates for 2016 have been reduced by approximately $100 million, falling from EC$296 million in 2015 to EC$$197.6 million in 2016.

“So don’t expect the growth and employment that should come from this exercise,” he told the media and party supporters at Democrat House.

“Everyone of us here have (sic) grappled with that for years,” he told the media briefing, where he was flanked by opposition MPs.

“And not only are they not putting the money, they are putting money which is a fiction, because it is not real,” Eustace said of Ralph Gonsalves’ Unity Labour Party (ULP) administration, which has been in office since March 2001.

He also announced that opposition MPs will not take part in the Estimates debate, as part of on-going protest of the results of the Dec. 9 general elections, which the NDP claims the ULP stole.

The NDP is contesting the election results in court.

He spoke of the implications of a deficit budgets, saying:

“So here, you have a situation in which the government is saying to you, ‘We have a certain amount of money to spend. Out of that, we expect to do projects; we expect to pay for certain things’ when the money ain’t there.

“The money you get from taxes, after you have collected your taxes and so on, you still have hundreds of millions of dollars that you don’t have to spend, but you say you are going to spend it,” Eustace said.

He said this leads to less employment as a result of fewer projects, and lack of economic growth.

“Because you are lying. This money is not there. But on paper, … they will put in a figure, although they know they don’t have the money,” Eustace said, adding that opposition MPs have been pointing this out for years.

Eustace said that this is fundamental to understanding how the ULP government functions.

Eustace, however, said that the average annual receipts under that category over the last 10 years is EC$2.8 million.

“So, it can’t cover the deficit. So the thing is a fiction. It is made up, on paper, to make the Estimates balance. I don’t know what kind of system it is. It is stupidness (nonsense),” Eustace said.

He said that to raise revenue, a government can raise taxes or be more efficient in tax collection.

“But to find $151 million to do that in our Estimates is impossible. You can’t get that from any government revenue. So, it could mean that you also going to do more borrowing. But we are not supposed to be borrowing to pay wages and salaries. We should be earning that from our taxes,” Eustace said.

Noting the projected increasing deficits, Eustace said: “They are not looking for any improvement, they are not prepared to do anything about it, just let the deficit grow and grow and grow. That’s what they are doing…

“It is hard to sit down in the parliament and listen that debate year after year. It is not easy,” Eustace said.

“And when you have poor results at the end of the year, negative growth as we have had four years in a row, plus low growth in all the years, you feel useless. You feel useless, frustrated, your time wasted sitting down there to listen to that garbage,” Eustace said.