NDP to respond to ‘Labour’s pressure budget’ next week 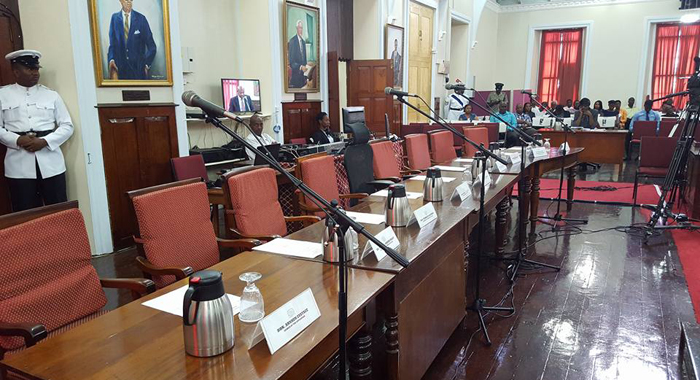 The main opposition New Democratic Party (NDP) says it will respond next week to the EC$912.9 million Budget that Parliament approved this week during a session that NDP lawmakers did not attend as part of an on-going protest.

The NDP’s responses will come on Monday and Tuesday during sessions at Frenches House, beginning 4:45 p.m. each day.

In a statement on Thursday, the NDP said all its Parliamentarians who boycotted Parliament “in our on-going show of defiance of the lack of proper governance in this country, will make formal responses to the budget and put forward counter proposals as part of our growth agenda”.

The NDP, which rejects the Ralph Gonsalves administration as illegitimate, described itself as “ the people’s genuine alternative for growth and development”.

Parliament has approved the Budget EC$912.9 million, which includes a current account deficit of EC$11.9 million.

In the Budget, Gonsalves, who is also Minister of Finance, announced increases in several taxes as well as a new 2 per cent tax on cellphone calls.

The new tax on cellphone calls is in addition to increases in property tax on commercial buildings, driver’s licenses, gun licenses, and the introduction of Value-Added Tax on a number of items, including chicken, lentil, salt, butter, yeast and baking powder.

He said that to widen the tax base and improve buoyancy, his government will introduce value-added tax on packaged rice for retail sale; table and cooking butter; and brown sugar; and whole chicken and chicken parts, except chicken back, neck and wings.

Some VAT-exempted will be made taxable, namely lentil and pigeon peas; cooking oil, except coconut oil; shortenings; salt; yeast; and baking powder.

“The NDP believes there are better ways of fiscal management, including cutting back wastage and corruption; instituting economic-sustainable projects and targeted investments in the productive sectors, that could avoid the new set of increased taxes that we see on the already overburdened population,” the party said in the statement.

It said there are countless studies that have shown that increasing the tax burden over a certain threshold is counterproductive to growth.

“… we believe that St Vincent and the Grenadines has now crossed that threshold under the failed policies of Ralph Gonsalves,” the NDP said, adding that those ideas will be explored at “the special People’s Public Budgetary Session” next Monday and Tuesday.

“The general public is specially invited to participate in the sessions at Frenches House in Kingstown. The business community, farmers, traders and other sectors are particularly invited,” the NDP said, adding that attendees will get the chance to ask questions of all of the representatives.

The sessions on both days will be chaired by Monty Maule, a businessman, lay preacher and former Speaker of the Houses of Parliament.

Vincentians to pay increased and new taxes in 2016