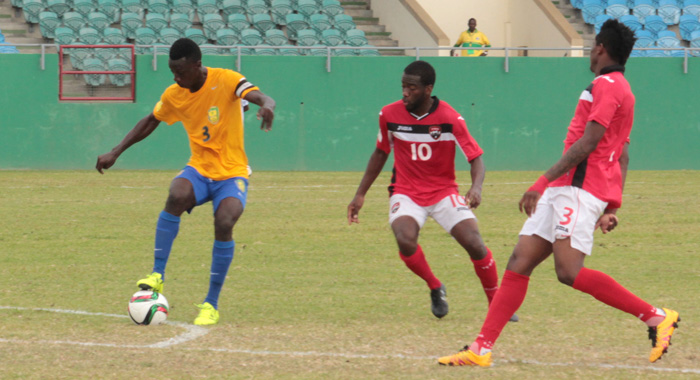 Assistant coach of the St. Vincent and the Grenadines senior men’s national football team, Wesley “Butu” Charles says the team will go into Tuesday’s return leg of the 2018 World Cup qualifier against Trinidad and Tobago confident despite going down 2-3 to their southern neighbours on Friday at the Arnos Vale Playing Field.

Though disappointed by the loss, Charles was still full of praise for the players, who, he said, “left their hearts on the pitch”.

“They gave their all. I cannot fault them for the effort and I am sure the whole country will agree with me,” the former national defender said of the team, which is marketed as “Vincy Heat”.

The loss on Friday was SVG’s third in as many matches and followed a 1-6 defeat to the USA away and a 0-4 beating at the feet of Guatemala at home.

The latest defeat ruled out any slim mathematical chance Vincy Heat may have harboured of making it into the next round, but Charles says the team will still play in manner that will bring pride to the country.

“We have two more matches to play against Trinidad on Tuesday night and against the USA in September here and we will be approaching those matches with the same attitude as we did this latest match. We will play hard and for the people of SVG.”

He said that while there was not much time before the return match to iron out problems on the field, the team has been making every use of “blackboard sessions” to work at eliminating their mistakes.

In Friday’s game, “Vincy Heat” took a 1-0 lead into half time by virtue of a Myron Samuel 43rd minute penalty, but conceded three second half goals to give away the three points on offer.

They, however, were thought to be unlucky on the day as two more infringements in the box were not ruled in their favour.

In assessing the match, Charles said he felt that his players allowed the Trinidadians too much space and “some players were also guilty of doing a bit too much dribbling”.

He said that he, along with head coach Cornelius Huggins and the rest of the coaching staff, will be working with the players to address these areas.

SVG got goals from Myron Samuel (43rd) and Shandel Samuel (77th) while the Trinidadians countered with goals by Joevin Jones (51st) and Levis Garcia (71st & 81st).

Trinidad’s head coach, Stephen Hart, was relieved that the team had bagged the three points but said he was a bit let down by the performance of his arsenal, which failed to fire or were just not given the chance to.

“I cannot accept this performance but what I would say is that we fought our way back. We got three points and we can play much, much better, we have to look deep within ourselves and be more efficient with and without the ball,” Hart said.

He said that Trinidad and Tobago, though having plenty of the ball, failed to take advantage of their opponents and allowed them to get back into the game.

“For the first half, we had a lot of possession. We got into good positions all over the field and then we struggled to make the final pass or cross the ball properly or just have that impetus to have shots on goal and St. Vincent got the penalty at the right time just close to the end of the half and that gave them a lot of confidence,” the coach said.

He added: “But to be fair to them they were playing well they have a way of playing and they stuck to it”.

The Trinidad head coach said SVG played well and, based on what he saw on Friday, he is still at a loss as to how they were beaten 4-0 by Guatemala.

He, however, said he felt that his team brought on some of the problems by not playing to a plan at times.

“I thought we didn’t show our real purpose in closing down the ball in pressing and our organisation between midfield and backline was, at times, for me, shocking.

“I didn’t realize some of the things we were doing. Once you realise a team is going to play direct balls, the objective is to stop them from playing those balls from as early as possible.”

Hart said that his players appeared weak at times in carrying out the strategy, not efficient enough or fully focused and, on scale of one to ten, he will give his team seven.

Looking ahead to Tuesday’s game and the Soca Warriors’ chances of making it into the Hex (the final Group play off stage), Hart said his players “need to realise that we are at the business end of trying to get into the Hex and what you have done in the past means absolutely nothing”.

In addition to taking the three points, Trinidad and Tobago were boosted by Guatemala’s 2-0 victory over the United States Friday night — their first over the US in 21 years — leaving the “Warriors” atop the group with 7 points ahead of Guatemala (6 points) and USA (4).

Meanwhile, Asked what they would be looking to come away with on Tuesday at the Hasley Crawford Stadium, Charles said: “A win. We are going all out for a win.”

But as confident and optimistic as Charles may sound, the facts show that SVG have never beaten Trinidad in a World Cup Qualifier despite providing stern opposition for their more illustrious counterparts in the two previous face offs, thereby earning the respect of the Vincentians.

The teams have met twice in World Cup Qualifiers in 2004 for the 2006 Finals and the Soca Warriors have won both — winning 2-0 at Arnos Vale and 2-1 in the return fixture at the Hasley Crawford Stadium.

Team officials said that while there were some players who received “little knocks” in the game on Friday they were all passed fit by the medical team and travelled to Trinidad.