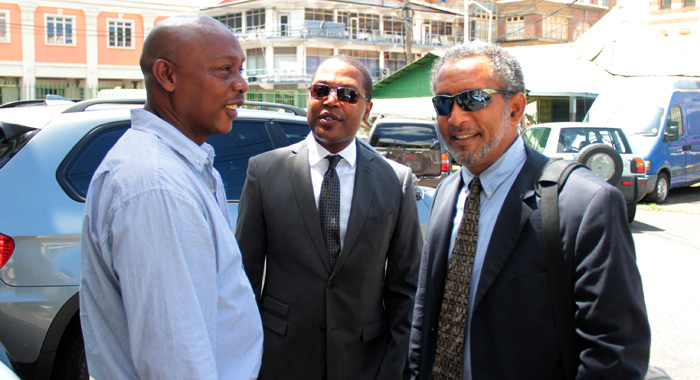 From left: Petitioners Lauron Baptiste and Ben Exeter, along with NDP President and Leader of the Opposition, Godwin Friday. (IWN file photo)

Lawyers representing the opposition New Democratic Party in the election petitions before the court are mulling over whether High Court judge, Justice Brian Cottle should preside over the substantive matter in light of comments he made Monday in a judgement related to the case.

Cottle on Monday refused an application by the government to throw out the NDP’s petitions, saying the application was premature.

However, having had the benefit of full arguments I am of the view that such an application, if made at the beginning of the hearing of the petition, is bound to succeed. This indication may be of some assistance to the parties in deciding the way forward and saving costs, time and national uncertainty,” he further said in his ruling.

NDP vice president and MP for the Northern Grenadines, lawyer Godwin Friday, reacted to Cottle’s statement on his party’s radio programme on Monday.

“… I don’t want to pre-judge the legal team who is advising us on the matter, but it certainly is a live issue, … from my preliminary discussion with the lawyers in the case, that that is a matter which will be a live issue going forward as to whether the present judge can continue to hear the matter on the present petition,” Friday said.

“There is a good argument to be made that in a sense, he has made a determination on the matter and then cannot hear the substantive case when it comes forward,” Friday said.

Friday defended the celebration that erupted among NDP supporters who had gathered in Kingstown to hear the ruling.

“… there is good reason for that because the petitions, our petitions, the petitions of our candidates Ben Exeter and Lauron Baptiste, are still before the court and they proceed.”

But the government and its supporters, along with some legal minds, have said that the NDP’s celebrations would be short-lived as the funeral march of the petitions was postponed rather than cancelled.

Friday, however, said his party is taking the court matters one step at a time.

“When they come to that point of arguing the petitions, whatever hurdles there are, … will be dealt with at that stage.”

He said the NDP always knew there would be hurdles to overcome, but the NDP is asking that the petitions be ventilated in court.

“And we are hopeful that in due course a full hearing of the matter will take place and that the claim, the petitions will succeed. Today is but one step in the process,” Friday told listeners.

“The judge did say in his ruling that he went on to hear arguments … on the substantive matter as to whether the security for cost that was given by Exeter and was given by Baptiste, whether it was … valid. But, in the beginning, he said he had no jurisdiction to do so. So we are taking one step at a time,” he further said.

“He has done a service to the country,” Gonsalves said of the judge.

“Because he has heard all the arguments, he said to save time, expense, any uncertainty — What do you hear NDP propagandists saying? Well, we must ask for a different judge,” Gonsalves said, and asked if the NDP is going to go judge shopping like someone trying to decide which frock to buy from among Syrian stores in Kingstown.