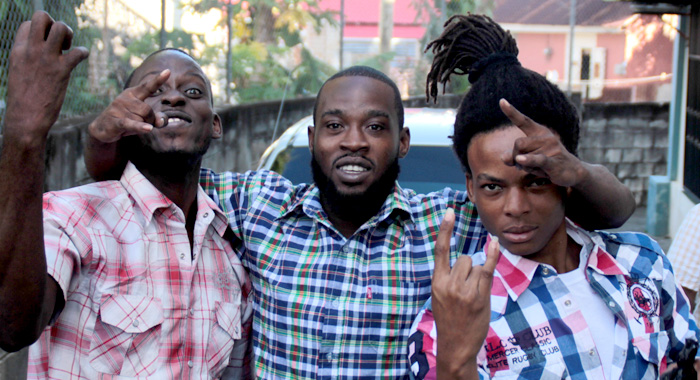 From left: Ekron Thomas, Kemroy Craigg and Derrol Small were freed of a murder charge at the preliminary inquiry stage on Monday. (IWN photo)

It did not matter to Kemroy Craigg that he did not know where he was going to sleep Monday night.

One thing was for sure: it was not Her Majesty’s Prisons, as had been the case for the past eight months.

Craigg, 20, along with co-accused Derrol Small, 26, and Ekron Thomas, all residents of Union Island, were on Monday freed of a murder charge at the end of a preliminary inquiry at the Serious Offences Court in Kingstown.

They have been on remand since Aug. 5, 2015, charged with the murder in Union Island of 29-year-old security guard Allington Caine, originally from Byera.

Chief Magistrate Rechanne Browne-Matthias, having heard the evidence of six witnesses and was not convinced that the prosecution had put forward a sound case.

At the last minute, after a day of testimony by the lead investigator, Head of the Major Crime Union, detective Inspector Atland Browne, senior prosecutor, Adolphus Delplesche asked for an adjournment for the prosecution to locate another witness.

Delplesche told the hearing at the Serious Offences Court in Kingstown, that the witness is a minor and his guardian had committed to bringing him to court, which they failed to do.

Grant Connell, one of the defence lawyers, objected strenuously to the adjournment.

“After we have heard what’s supposed to be a chronology of events that is supposed to manifest itself as formal evidence by an investigating officer, the prosecutors now raises this?” Connell said.

He said they have been in court for eight hours, and asked if the police did not have transportation to locate the witness.

Connell pointed out that he has gone to court in Chateaubelair or Georgetown and return to Kingstown on the same day, in time for other hearings in the capital.

“You want to send three Vincentians back to prison on an allegation supported by what you saw there by Inspector Browne, which is nothing short of an incomplete investigation?” Connell argued.

He said he has seen the prosecution try their best in court to patch up “terrible police work.

“But he is stretching his efforts now,” Connell said, and asked the magistrate to discharge the matter.

He said the prosecution could re-file a charge if or when they locate the minor and his guardian and can put a case together.

He said Thomas has had an infection in his intestines for two months.

“We are asking you to discharge this matter so at least — I have to say go to the airport, because at the rate down there (hospital), he might better go back round there (prison)…” Connell said.

“The police must be made to do their job and do it properly. Don’t send down a case with a hope,” he said.

“The prosecution has to tried, but I have my job to do. But the police must do their job, because I guarantee when they come here, I will do mine,” Connell further told the court.

Bruce, the other defence lawyer in the case, expressed concern that the men were “languishing in prison”, adding that at the “ninety-ninth hour” the prosecution was asking for an adornment.

He said he has had to return to the country earlier than planned because of the court matter.

Bruce said that he was not convinced that a new witness would affect the case.

The magistrate noted that the proceeding was a preliminary inquiry in which she is only concerned about whether there is sufficient evident for a trial.

She said that having listened to the prosecution’s case, she is not satisfied that there was enough evidence.

Connell was critical of the police after the matter was discharged, telling iWitness News: “Police don’t investigate matters properly. They wait on a tip-off or get a confession from the accused and the file is completed on a hope-it-would-hold

“The prosecution can only work with the content of the file that is before them. They can’t do the impossible.”