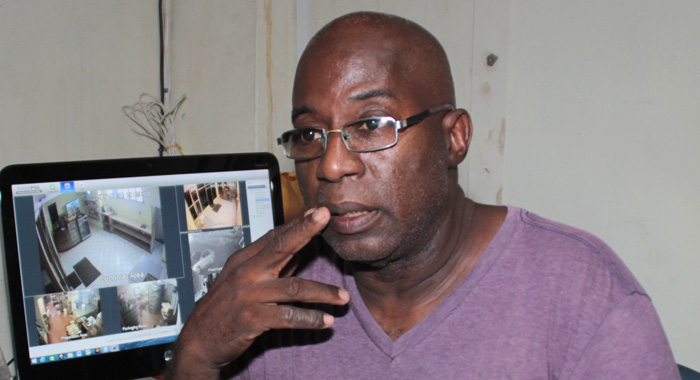 Businessman Adrian Deane recounted a horrid experience he had with the three #Jamaicans before he was charged with human trafficking. (IWN photo)

A Vincentian businessman was on Thursday freed of three counts of human trafficking, the first such case in St. Vincent and the Grenadines.

The prosecution interrupted the proceedings and withdrew the charges against 61-year-old Adrian Deane of Brighton, owner of Farmer’s Market Bakery & Snackette in Arnos Vale.

Deane had been accused of trafficking three Jamaicans to SVG, a charge he denied.

The prosecution pulled the plug on the case after defence attorney Grant Connell had crossed-examined two witnesses, including Head of the Criminal Investigations Department of the Police Force, Superintendent of Police Ruth Jacobs.

Deane told iWitness News on Monday that he had invited one of the Jamaicans, a man, who was at the time in Cayman Islands with his girlfriend, to SVG after he claimed to have expertise that Deane thought was an asset to his business.

Deane learnt of the man from one of his (Deane’s) employees.

The two Jamaican came to SVG in 2014 and spent five days as guests at Deane’s house, where he lives with his wife and two sons, before returning to the Cayman Island.

Immigration officials allowed them six months stay in SVG and Deane said he accommodated them at his home and later at a hotel and a rented private home, at great expense to himself.

In addition to providing lodging for the three Jamaicans, Deane said he provided food for them, including meeting their particular demands for bottled water — as they did not drink the local tap water, and snapper, rather than kingfisher and dolphin, which his own family eats.

Deane said he also provided healthcare for the man and his common-law wife, paying for a dental procedure for her and to treat a cyst on the man’s eye.

By July, the relationship started to break down,

Deane told iWitness News, and the older of the two Jamaican men pulled a cutlass on him in his own home, which he reported to the police,.

But he gave the trio a second chance, after they asked his forgiveness.

However, the relationship broke down again while they were awaiting the outcome of applications for work permits for them, and they went to the police.

The truth of the matter is, it’s recruitment, transportation, harbouring — so I have them in oppressive contrition where I have them working, I exploiting them, they no have nothing to eat, I have them there suffering is what she (Jamaican) said,” Deane said.

“Meanwhile the rest of the workers out there vex because they (Jamaican) are getting the royal treatment,” Deane said of the impact that his favourable treatment of the Jamaicans had on his business.
Deane said that he was naïve and might have fallen victim to a plan by the Jamaicans to have him pay to establish them in SVG.

He, however, said that his faith in God helped him through the difficult ordeal, which he told iWitness News cost him some EC$30, 000, which includes the money he spent on the Jamaicans and legal fees.

Deane’s lawyer, Grant Connell, said the charges against his client were “just another case where the police put the cart before the horse.

“Instructions were given by the head of that department (CID) to investigate the matter after a one-hour conversation with the Jamaicans. On completion of the investigation the file was reviewed and the electronic interview which was conducted on the defendant, Mr. Deane, wherein he told his side of the matter, was not even looked at by the head of the department before deeming the file complete,” Connell told iWitness News.

“The case had not merit. I guess it was done in haste to prove to the world that we were being effective, but in the process sacrificed a hard-working Vincentian who runs a business trying to make ends meet in this harsh economic climate.

“The police are in dire need of proper training. If the powers that be fail to address the issue the society will pay the price,” he said.

The charges against Deane came three months after the United States State Department released its 2015 Trafficking in Persons (TIP) report, in which it placed SVG on its Tier 2 Watch List, a downgrade of the 2014 ranking.

Among other things, a Tier 2 Watch List groups countries that do not fully comply with the Trafficking Victims Protection Act’s (TVPA) minimum standards, but are making significant efforts to bring themselves into compliance with those standards.

The government of SVG has continually protested the nation’s placement in the report, saying that it does not provide any evidence of human trafficking occurring in SVG.

The State Department has repeatedly said that no one is charged with human trafficking in SVG, but then Minister of Foreign Affairs, then Sen. Camillo Gonsalves, responded, saying this is the case because there is no evidence of the crime having been committed in SVG.

“If you read the Human Trafficking Report, you will get a better sense of the friends and enemies of the United States than you do the countries that are more seriously grappling with human trafficking,” Gonsalves said in September at the beginning of a two-day seminar on Human Trafficking Prevention.

The 2015 report says that human trafficking is a growing problem in Latin America and the Caribbean, a region, which it says, contains major source, transit, and destination countries for trafficking victims.

The report says major forms of trafficking in persons in the region include commercial sexual exploitation of women and children, labour trafficking within national borders and among countries in the region (particularly in South America), and the trafficking of illegal immigrants in Mexico and Central America.