Election petitions to be heard on May 27 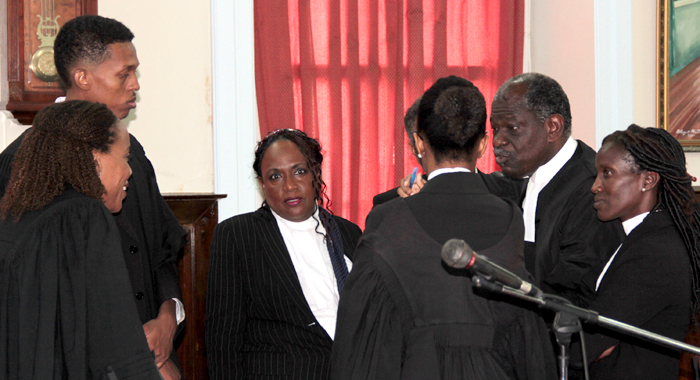 The High Court will on May 27 hear the two election petitions filed by the opposition New Democratic Party (NDP) after the December 2015 general election.

But, whatever the ruling in that trial, the case will end up in the Court of Appeal, lawyer for the NDP, Stanley “Stalky” John, QC told reporters after Thursday’s proceedings.

He said High Court judge, Justice Brian Cottle, should, therefore, send the case directly to the Court of Appeal.

After hearing arguments from both sides, on Thursday, Justice Cottle set May 27 for the trial.

Thursday’s court hearing is the latest in the on-going legal battle in which the NDP is asking the court to declare its candidates winners of the Central Leeward and the North Windward seats or order fresh elections in those districts.

Any such decision would see a fall in the Unity Labour Party (ULP) administration, which electoral officials have declared winners of the general elections, by a one-seat majority.

Regional and international observers say that the elections were free and fair, but the NDP is alleging that the ULP stole the vote.

Astaphan welcomed Thursday’s court’s decision, telling journalist, “It’s unfortunate it has taken so long because of resistance to get to this very sensible position.”

When the matter comes to trial on May 27, the government is expected to again file an application asking the judge to dismiss the petitions as improperly filed.

After hearing a similar interlocutory application in March, Justice Cottle ruled in April 4 that the motion to dismiss was premature.

In the judgement, the judge, however, said that if the arguments were made at the beginning of a trial, the government’s arguments would prevail.

Asked on Thursday if he would be making the same submissions on May 27, Astaphan said,

He, however, said he was not sure if the judge would again rule in favour of the government.

“In my many years of practice, I never predict any case at all except to say we are going to try and do our very best to get it done right.”

Astaphan, however, said he is confident legal arguments are on his side.

“I never come into a case thinking I am going to lose and get beaten, but, sometimes, I do. So, in that sense, I am confident. But, like I said, I don’t know what the judge will inevitably say.”

Meanwhile, John told reporters that his side wants the judge to send the case directly to the Court of Appeal because the judge had indicated in his April ruling that he is unlikely to change his mind if the same arguments to dismiss are presented in open court.

“That being the case, we would certainly appeal to the Court of Appeal,” John told reporters, noting that the petitioners have a right of appeal.

“If he were to hear them again and rule in a similar way, we would be appealing. If he rule otherwise, the other side would be appealing. So we may as well go to the Court of Appeal immediately, because, as he said earlier today, the issues are narrow issues,” John said.

John told reporters that the rules allow for the case to be sent directly to the Court of Appeal.

There is also the question of whether Justice Cottle would recuse himself in light of his earlier ruling.

John seemed to have been nudging the judge in that direction during his arguments on Thursday.

Asked if he was cajoling the judge to recuse himself, John told reporters, “Not at this stage.

“I don’t think I was, but, certainly, that is very much an issue in light of the contents of his judgement.

“That is something that the judge himself, I hope, may well be considering. We haven’t got to the stage as yet where that is an issue, but we will see what happens when we get to that state. Hopefully, there wouldn’t be the need for that,” he said.

A number of other lawyers also appeared on behalf of both sides.

2 replies on “Election petitions to be heard on May 27”