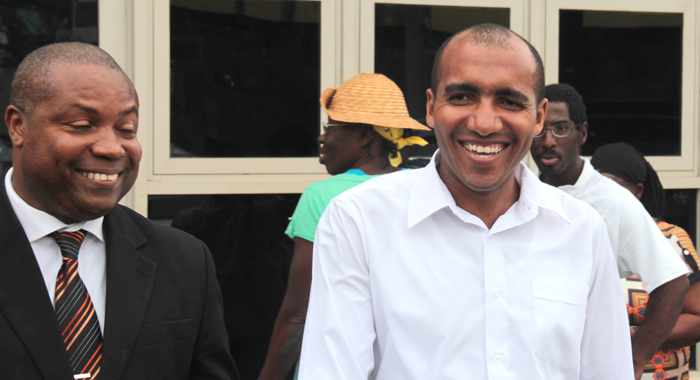 The prosecutor in the case in which opposition candidate Ben Exeter is being tried on a number of charges has told the defence that there are not points for crowd response.

Assistant Director of Public Prosecution, Colin John made the observation after a comment by defence counsel Israel Bruce on Monday during cross-examination of former police officer Granville De Freitas at the Kingstown Magistrate’s Court.

De Freitas and Corporal 632 Morris arrested Exeter in Kingstown on Dec. 29, where supporters of the ruling Unity Labour Party and the opposition New Democratic Party had gathered where the ceremonial opening of Parliament was taking place.

Exeter was there and was arrested and charged with assaulting a police officer, resisting arrest, assaulting De Freitas, and having a firearm at a public meeting.

At the time, Exeter was the holder of a licensed gun, but the permit has since been rescinded.

During cross-examination on Monday, defence counsel Israel Bruce accused De Freitas of lying to the court.

“You remind me of a very prominent story told in this country: show me a liar and bet your bottom dollar, he thief already and he go thief again,” Bruce said.

“Cheerleaders?” Bruce said, adding that if the prosecution can’t play to cheerleaders that’s their problem.

“There are no points for crowd response,” John further said.

“No points for crowd response? You think you are distracting the magistrate from hearing these lies? Try as you may,” Bruce said.

She told the court she wanted to establish whether he had been fired for dishonestly rather than resigned, as he had said.

De Freitas told the court that he resigned in March, after six years as a police officer.

The audience in court on Monday included supporters of the NDP, including party Vice-President and Member of Parliament for Central Kingstown, St. Clair Leacock, NDP candidate for North Windward Lauron “Sheara” Baptiste.

He has pleaded not guilty to all of the charges, which the defence says are politically motivated.

Cop who arrested Exeter quits Force and becomes a fisherman

One reply on “No points for crowd response, prosecutor says”