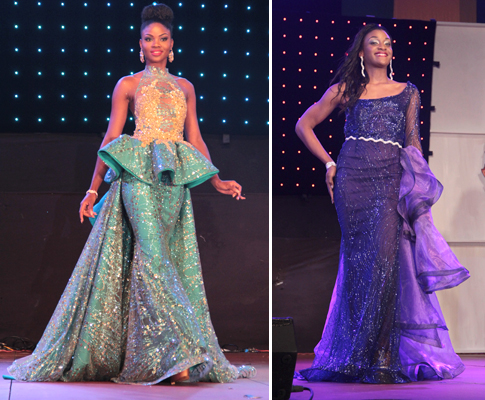 Eyebrows were raised when it emerged on Friday that Vincentian Kimon Baptiste had designed the dresses worn by the St. Lucia and St. Vincent and the Grenadines (SVG) contestants in the Miss Carival pageant.

She also won the Swimwear category and placed Second Runner-up.

In 2015, David won the Evening Wear category of her national pageant wearing a Kimon Baptiste design.

The fact that Baptiste had designed both dresses became public as their descriptions were read during the show.

On learning of this, iWitness News published photos of each dress on its Facebook page and invited its fans to comment, saying, “Two dresses, same designer, same competition. What are your views?”

Giovanni Charles said it was a “bad idea” to have one designer for two contestants in the same pageant.

“Might stir up some unnecessary drama as to which is better and what not…” Charles said.

Entertainer and radio personality Kahailia Ryan-Beach said there is “an immense disparity” between the two dresses, adding, “this may cause problems”.

Twanie Ollivierre said, “… is that even a question? Nikianna SLAYED her dress………. tbh i dont even know if that other one is even considered to b a dress……come on”.

But some persons thought there was nothing wrong with two dresses from one designer competing in the same pageant.

“Nothing wrong with that this is not the first time,” wrote Grania Williams.

Ja’Mya Muva said: “Nothing wrong with that.. am sure they both saw their dresses before goin on stage.”

Oyindamola Barbour contrasted the pageant to celebrities wearing outfits by the same designer.

“So how many times haven’t we seen celebrities, on the red carpet, wearing the same designer??? It all came down to ‘who wore it best’,” Barbour said.

After the pageant, iWitness News spoke to David about the fact that two contestants wore Kimon Baptiste designs in the pageant.

David told iWitness News that she retained Baptiste to design her dress for the Miss St. Lucia pageant last year “and we decided to have her on board this year”.

David said the design of her Miss Carival dress was Baptiste’s idea.

Asked what she thinks about the dress, David said, “I like it.”

She said she was also aware that Baptiste had also designed Williams’s dress.

“It is her (Baptiste’s) homeland, it is her country, she supported her country fully,” David said.

When asked, David told iWitness News that she was not saying that Baptiste did not support her fully.

“But then they always put their best foot forward,” she, however, said.

Asked if she felt there was a conflict of interest involved, David said nothing and walked away.

She had earlier said in the interview, which took place around 3:40 a.m. Saturday after the results of the show were announced, that she had to rush back to her hotel to meet the 4 a.m. check out deadline.