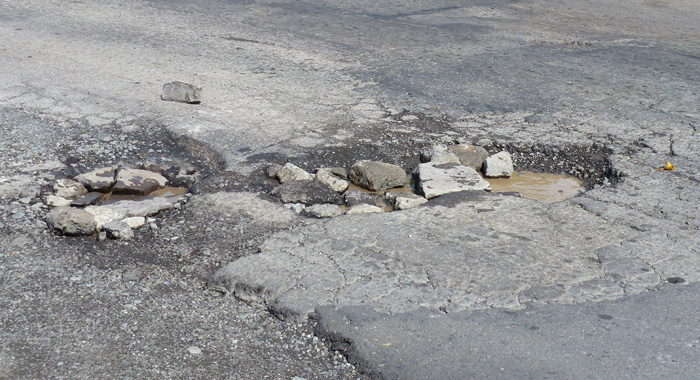 I do not know the dire spora so I cannot love them. I know carnival, though, and God knows I do not love it. But the combination of the dire spora and carnival, I love. Plenty. I love the combination because that is what does make we get some of our potholes see some stone and tar. The “some,” though, are limited to the ones the transitory visitors – and that is what them is, “visitors” and “transitory” — are more likely to traverse during their fleeting visit back “home.” Accent on “visit.” And this is only their homeland — not their home. “Dire spora,” if you don’t know is how we — exclude me out — pronounce “diaspora.” So there.

I do not look a gift horse in the mouth, so accept the pothole patch with glee if even it was not meant for the betterment for us live-here Vincentians. Only a blind and deaf bigot would believe otherwise. Weren’t the holes there in February? March? April? May? Early June? They were not patched then, were they? Don’t doubt: pothole patch isn’t for us. Pothole patch is the Government masquerading; but I done say that. The patches them is to fool and impress the dire sporas who come to play mass too. The patch that they put down ain’t go hold for three months good, alas, but by that time the dire spora done gone back home – yes home, the real one – and we are still here while they spread the false news that the roads are better than the live-heres say. That sort of scam — the carnival patch programme — is a double whammy: it fools the dire spora who come who then, unintentionally, mind you, fool who didn’t. So when they go to the town hall meetings, everybody is on the same false page, while the live-here cars getting mash up in the holes that they say do not exist.

The next pothole patch event is going to be in six months’ time — Christmas. Like carnival, Christmas is an event that would bring back enough of the dire spora for the government roll out the biannual stones and tar to fill the dreaded holes that has been mashing up our cars, year round, when the dire spora are not around. They are mako holes that do not mash up the visitors’ cars. Christmas pothole patch will be another opportunity for the Government be to fool the transitory visitors all over. And to facilitate and propagate the lies and falsehoods at the town hall meetings. Nothing outside of that.

You can hang your hat on pothole patch at carnival and at Christmas with the same certainty that you can expect the distribution of lumber and cement at general elections. The more things do not change is the more they stay the same and is the less we should expect them to change. Etcetera.

In three months I’ll be back thumbing my nose, saying, “I told you so,” when the holes return to the default position. And three months is a stretch.