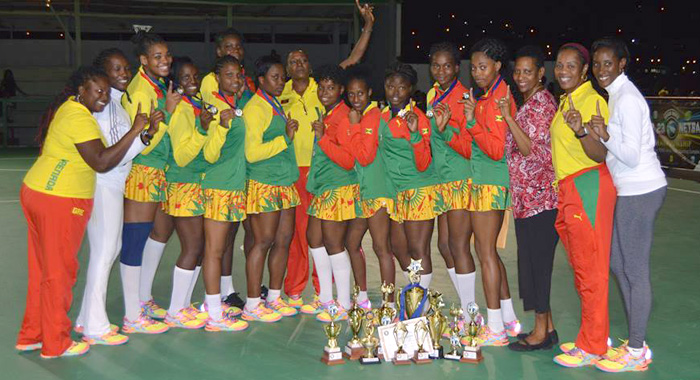 Grenada netballers retained their ECCB OECS Under-23 title on Wednesday after beating host St. Vincent and the Grenadines by four goals 30-26 in the tournament-deciding match in front of a partisan crowd at the Arnos Vale Sports Complex.

The champions, in addition, walked away with most of the major awards to cap an outstanding campaign.

Heading into Wednesday evening’s showdown, both teams had remained unbeaten and had set up a mouth-watering encounter that dragged many to the venue, some of whom had taken a self-imposed sabbatical from the sport.

But the lady from the “Spice Isle” served up a dish, which left many of the home fans reaching for napkins and tissues to soothe springy eyes, as they lead in every quarter 7-6, 15-14, 24-19 and 30-26. However, the Vincentians could be held culpable for the defeat since they had more shooting attempts — 49 — to their opponents’ — 42.

Grenada’s goal shoot, Renisha Stafford netted 22 of her 30 attempts while goal attack Tiffany Frederick made 8 of 12. And for SVG goal shoot, Khadijah Williams fought a more or less lone hand, scoring 25 of 38 attempts, with, Kenisha Francis 1 of 9, and Shanice Daniel none of 2, failing to pick up the slack at crucial points in the match.

President of the Grenada Netball Association, Glennis Roberts said that she was always confident that her team were going to retain the title they won in St. Kitts in 2015.

“We came here with respect for all the teams and took each day and each game as they came and we remained focussed on what we had to do and in the end we retained our title,” a beaming Roberts said.

Former national captain and ace goal shoot, Skiddy Francis-Crick felt that the Vincentians appeared too timid and this resulted in numerous turnovers and missed chances.

“Grenada is not a better team than us but we just looked sort of frightened on the court and were not shooting when we had the chances,” Francis-Crick — who led SVG to four titles — said after the match.

It was another case of missed opportunities as St. Kitts had 67 attempts and netted 42, while St. Lucia had 64 attempts and scored 46.

In the end of the tournament awards: