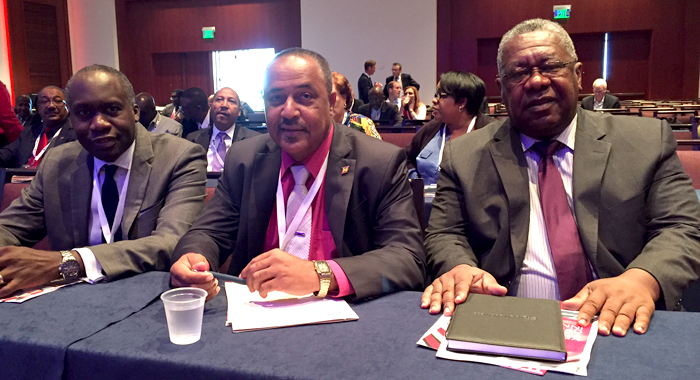 Chairman of the Council of Ministers of the Eastern Caribbean Telecommunications Authority (ECTEL), Sen. Dennis Byron, says that the new Electronic Communications Bill for Eastern Caribbean States is designed with best intention to serve the public interest, while offering service providers with opportunities to do business in our markets.

Speaking at the 32nd annual conference of CANTO in Puerto Rico, Byron told participants that the draft bill was recommended to the member states of ECTEL after extensive national and regional public consultation. He added that the new legislation will further advance the purposes of ECTEL, which include increasing innovation in service delivery and open competition.

Byron who is also the Minister with responsibility for Telecommunications in St. Kitts and Nevis, said that the issues which are at the heart of electronic communications regulations today for the ECTEL Member States are the reduction of roaming rates, introduction of number portability; over-the-top services and net neutrality.

The ECTEL Council Chairman said that: “While we consider all the definitions and biases in the debate on net neutrality rules, the people of our region must enjoy full access to the internet like all other citizens of the world.”

He supported the call by Telecommunications Ministers from Antigua and Barbuda, Guyana and Trinidad and Tobago for the expansion of broadband services at affordable prices to the people of the region.

The 32nd CANTO conference is addressing a wide range of issues such as net neutrality, internet of things (IoT), big data, investment in broadband networks and converged regulations.

The delegates and presenters are drawn from throughout the Caribbean region, North America. and Europe. Twelve ministers are participating from the Caribbean region. The delegation from the ECTEL member states include staff of the ECTEL Directorate, Commissioners and staff from the NTRCs of Grenada, St. Kitts and Nevis, Saint Lucia and St. Vincent and the Grenadines.