Protesters’ items removed from ‘Front Line’ because of complaints — Police 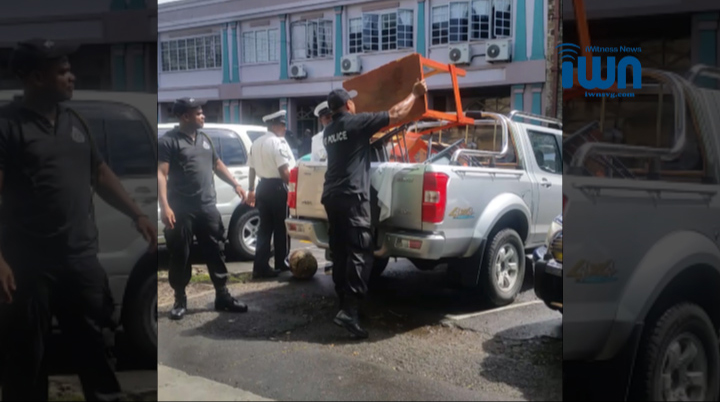 Police remove protester’s possessions from the “Front Line” in Kingstown on Friday.

Placards, furniture and other items belonging to opposition protesters were removed from the “Front Line” on Bay Street, Kingstown on Friday because persons had complained about them being a hindrance, acting Deputy Commissioner of Police Colin John told iWitness News on Monday.

On Friday, Assistant Superintendent of Police Timothy Hazelwood led three officers in removing the items, the second such operation since the protestors began their daily demonstration on Dec. 10, 2016, one day after the general election and the announcement of the results.

John, who returned to the Police Force on Aug. 2, after several years in the National Prosecution Service, where he was Assistant Director of Public Prosecutions, said he was briefed about previous interactions between the protesters and the police.

“The information I got is that they spoke to the protesters before and asked them to remove the stuff that was placed there. Nobody is preventing them from protesting, but complaints were made to the police about the placards that were placed on buildings and defacing persons’ property so persons asked the police for assistance in that regard,” John told iWitness News.

“Based on the information that we got, the police asked the protesters to desist from doing that before and that was not done. Also, there were some benches and tables that were there that, [at which] from time to time, persons would be seen playing dominos and things like that.

“They had asked them to remove them as well because persons — pedestrians — have been complaining about it being a hindrance to them when they are conducting business in that particular locale, but that was not done. So, as a result of that, the police undertook to remove these items from that area,” the senior police officer further explained.

Dexton Williams, one of the protesters, told iWitness News on Friday that they have permission to hang placards on the façade of the building where D’s Services was located.

John told iWitness News that he was not sure about the ownership of the building but said he was told that the police had received complaints about the placards being hung there.

Asked how the persons can exercise democratic right to protest without running afoul of the law or infringing on the rights of property owners, John told iWitness News:

“They can stand and hold their placards and send their message.”

The deputy police chief was asked how he would respond to a question regarding why the police had acted to remove the protesters’ items when there are also many streets and sidewalks in Kingstown where vendors obstruct pedestrian traffic.

“The thing is, vendors, they are plying their trade. What the persons are doing there is more for recreation more than anything else. That area is not a recreation hall per se. So, you can see the difference there in terms of someone who is using a tray (to display items for sale), as opposed to someone who is just sitting there playing dominoes or involving in social activities in that regard.

“Not because they may not complain about a stool or a table in Middle Street and they complain about this one, we have to deal with or try to address whatever [complaints we receive],” John said.

The police also removed tables, benches, flags and other items from the area, which protesters call the “Front Line”.

The protesters, supporters of the New Democratic Party, are demonstrating against the results of the election, which they say the Unity Labour Party stole.

Officials say that the ULP won a fourth consecutive five-year term in office by winning eight of the 15 electoral districts, while the NDP won the remaining seven.

Regional and international observers have declared the vote free and fair but the NDP is claiming electoral fraud and has brought cases to court challenging the results.