New police chief reminds cops that they are bounded by laws 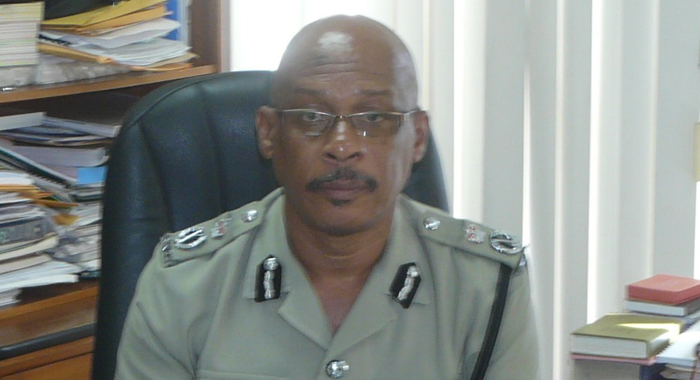 Renold Hadaway, the new Commissioner of Police, has laid out a blueprint for police officers here to shape policing in St. Vincent and the Grenadines (SVG) under his leadership.

Hadaway in his first general meeting with the body of the Police Force on Thursday — two days after he took up the position — said tunder his tenure, he wants discipline and the staging of lectures, among other sensitive areas to be addressed with urgency.

The new police chief, who has been a since 1982, thanked his predecessor Michael Charles, who had served as commissioner for three years.

“Commissioner Charles has done exceptionally well, especially with public relations. What the Commissioner has done let’s build on it,” said Hadaway.

“We have to be guided by higher authority so we cannot afford to act loosely and do things out of order. We are guided by laws and regulations,” Hadaway told the large gathering of police officers.

“As we forge ahead, I am asking for total commitment by everyone. We are charged with the responsibility to dispense law and order and we ought to be mindful of that. As we go forward we must be dedicated, committed and work diligently for the greater good.”

Hadaway said it will be remiss of him if he does not address the issue of discipline.

“We all agree that we can work on our discipline,” said Hadaway to a rousing response from the audience.

“‘Yes!’ As early as Thursday, August 18, 2016, a lecture will be held with the general body of the Police Force on the subject, ‘Discipline in the Royal St. Vincent and the Grenadines Police Force’.”

Hadaway, who has honed his skills in policing locally, regionally and internationally, appealed to the officers to sacrifice time for training.

“The whole issue of our business is to deliver quality service to the people of St. Vincent and the Grenadines. In the face of adversity, you have to stand tall, treat everyone with respect. They are human beings just like me and you,” said Hadaway as he again appealed to the general body to exercise their duties with restraint.

The new Commissioner of Police, who holds a Bachelor of Laws degree and over the years was trained in the United States, Barbados, El Salvador, Antigua and Barbuda and Jamaica,

said that under his tenure he would like to see an improvement when submitting files.

He also encouraged police officers to be mindful of how they speak to members of the public.

“The first approach should not be to treat people with aggression. Treat people as you would like to be treated,” said John, the former Assistant Director of Public Prosecutions.

John had served the Royal St. Vincent and the Grenadines Police Force as a police officer for a period of 23 years after his enlistment on January 16, 1988.

John, a lawyer by profession, said he would like to see police officers increase their knowledge about the various aspects of their job and said he will consult with the police chief regarding a number of initiatives that can be put in place to ensure that this is done.