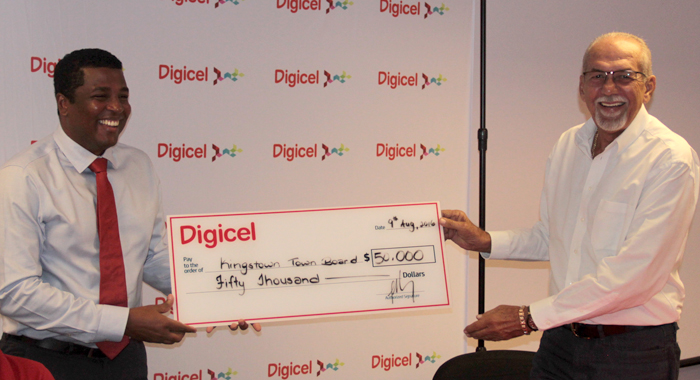 Telecommunications provider Digicel has donated EC$50,000 to the efforts of the Government to clean up Kingstown.

In presenting the cheque at a ceremony in Kingstown on Tuesday, Country Manager of Digicel, John Gidharry, said that Digicel consistently gives back to the communities in which it operates.

He said that before Vincy Mas 2016, Minister of Urban Development and Local Government, Sen. Julian Francis, was campaigning for a cleaner city.

Gidharry said that as a responsible corporate citizen, Digicel saw the need to get on board and is committed to ensuring that this becomes a reality.

“So, with the ministers and the government, we are very happy to set the tone and to work with our corporate partners and other corporate citizens to make sure that they get on board and we would like to make the effort to make sure we get this initiative going. We are all part of Kingstown and we utilise Kingstown on a daily basis and would like to see it evolve from where it is and I am happy that Digicel, my team, saw the need to get on board,” Gidharry said.

Francis accepted the cheque on behalf of the Government, saying that to say receiving the cheque from Digicel makes him happy would be an understatement.

The minister said that during the second term of the Unity Labour Party administration, the Government initiated a clean-up of sorts and invited vendors to register. Over 1,200 vendors did so.

Francis said that Kingstown has a unique charm, most of which has been obliterated by a lot of driftwood and pallet wood that is used to make furniture and other structures for vending.

He said the government has been doing some cleaning of drains and removing white goods from the city since January.

He said he told the Kingstown Town Board to suspend the effort until after Carnival, because some persons do not take out of the city the fridges and other items they bring in to facilitate their vending during the festival.

He said Gidharry had told him ahead of Carnival that Digicel was willing to contribute to the clean-up efforts, but he asked the company to wait until after the festival.

Francis said Digicel is the first and only business that has pledged or contributed to the clean-up efforts, but discussion with other businesses is on-going.

Francis instructed the Town Board officials who were at the event to open a separate account for the funds so that they would not be mixed up with the monies that the city managers use to finance their daily operation.