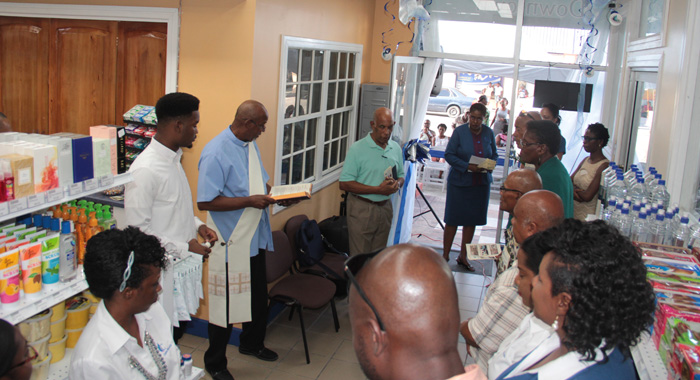 The company announced that it has opened accounts in the sum of EC$2,500 for each of the honourees and would grant them up to EC$1,000 in pharmaceutical products annually for their personal use for the rest of their lives.

Joel Providence, chief executive officer of Coreas Hazells, said that in opening the pharmacy, his company is “striving to expand and improve our service delivery to the people of St Vincent and the Grenadines and, in our way, promote the recurring and important theme of healthy living through proper diet and active engagement.

“This means a lot to us. And you mean a lot to us. As SVG’s oldest trading company, we are obliged to play our part,” Providence said.

He, however, used much of his speech to focus on his company’s celebration of the sporting personalities.

He noted the presence of Thaddeus Michael “Mike” Findlay — who later read the citations for the three honourees — and said Findlay would be the first entrant if a hall of fame for sports were created in St. Vincent and the Grenadines.

“Today, we recognise three sportspersons who have followed in the footsteps of Mike Findlay. I am sure Gunny and Guy … have played with or against him in football or cricket. I don’t recall Mikey on the netball courts but Genita would still have been able to witness his exploits as one of SVG’s premier athletes before focusing exclusively on cricket. An inspiration to her no doubt,” the executive said.

Providence said that while he did not want to pre-empt Findlay’s citation, he wanted to say in a few words about the honourees.

“I derived great pleasure in witnessing Guy Lowe’s prowess on the football field, most times with, speed and ball mastery down the right flank, threatening always the security and peace of mind of the opposing defence and goalkeeper, whether representing the national team in the 70s and 80s or playing for the bullying local team — Roseans.

“I have seen Jenita engaged in field events on quite a few occasions at sports meets or just simply training. I have always admired her tenacity and disciplined approach to a field of endeavour not usually attractive to young women after their school days are over. The fact that she is still involved in athletics today speaks volumes of the character of this exemplary Vincentian.

“I first came into direct contact with Gunny Hinds in a soft ball match at Victoria Park when Montrose (where I lived) decided to take on the Park Boys. As a then 16-year-old, I was the best spinner of a soft ball that Montrose had to offer and I didn’t do too badly that Sunday morning but I realised that I was nowhere in the class of Gunny who got me out with a doosra using a soft ball!” Providence said.

He said that in appreciation of the contribution of Lewis, Lowe and Hinds to sports and sports development in SVG and beyond, and in keeping with his company’s declared commitment to recognise the exploits of outstanding former national athletes in all sporting disciplines, the awards were presented as Coreas Hazells mark the opening of its pharmacy in downtown, Kingstown.

“We will not only present plaques of honour,’ Providence said, adding that the company has also opened special accounts at Coreas to the value of $2,500 for each of the honourees.

“In addition, we are announcing today a pledge to each of these supreme former national athletes, the sum of $1,000 each and every year for the purpose of buying health supplements or prescription drugs for their personal and singular use, from any one of our pharmacies, for the rest of their life. This programme will begin on Oct. 1, 2016 and continue until Genita, Gunny and Guy take the decision to go and visit their maker,” Providence announced.

He said the company would look to expand the number of honourees receiving such benefits.

“We will rely on the consideration and input of the Ministry of Sport, the National Sports Council, national sporting associations and individuals such as the SVG’s greatest sporting icon, Mr Michael Findlay — who himself is deserving of the highest honour that this nation could bestow on a national,” Providence said at the ceremony, which was also addressed by Minister of Sports, Cecil “Ces” McKie.

“I ask Vincentians to take advantage of this third pharmacy that we have opened for their convenience. Outside of direct commercial intent, we truly want to promote healthy living. Too many persons are dying of non-communicable diseases such as diabetes and hypertension and we believe that we too can help to educate persons on these health issues by providing information and the right dietary supplements. We hope to be able to work with physicians, nurses and the healthcare community as a whole, in advancing the quality of our lives. Today’s activity is one small step, one small measure towards this goal,” Providence said.