MP says Canouan residents crawl like iguanas to get to beach 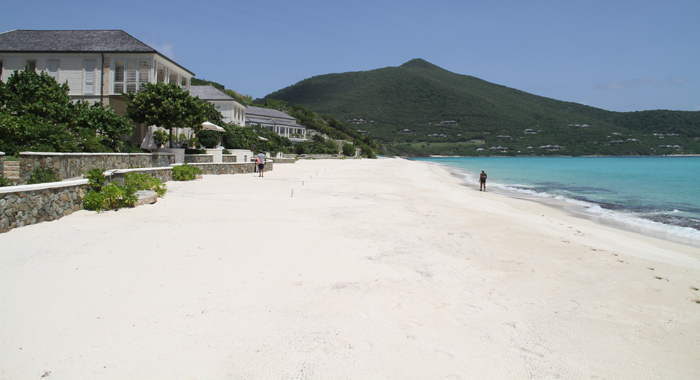 Some residents of Canouan maintain they must have access to all beaches, such as this one, Godhal,located near Pink Sands resort. (IWN photo)

An opposition lawmaker says that while the New Democratic Party (NDP) administration distributed lands to Vincentians, the Labour Party government has vested the nation’s lands in a state company, making less them available to citizens.

Member of Parliament for Central Kingstown, St. Clair Leacock, told an NDP press conference in Kingstown last week that as a consequence of the ULP’s policies, Vincentians, especially those in the Grenadines, are becoming increasing like second-class citizens in their homeland.

Leacock’s comments on Tuesday came as he opposed the government’s decision to sell 31 acres of lands at Mt Wynne-Peters Hope to “Canadian investors” for EC$7 million.

Leacock said the NDP established itself on land reform programmes, giving land to the landless. This resulted in Vincentians transforming themselves into middle-class people, and fuelled the professional class among their children.

“The ULP has created National Properties to take back the land, dispose of the land, change the ownership patterns of the country to make sure that foreign interest is better represented in St. Vincent and the Grenadines on every square inch of land that is available,” Leacock said.

He said that National Properties, the state-owned firm in which most state-owned lands and other assets, such as some buildings are vested, has not presented an audited financial statement in its history.

He said one would assume that a company that has been vested with “the state silver” would have a healthy balance sheet.

“National Properties today represents a debt-carrying vehicle if you look at the national budget. It costs the taxpayers for the existence of National Properties. We don’t benefit from it. It is part of a political, financial ponzi scheme. We do not know which lands represent assets and we don’t know which sets of lands represent inventory… It’s just get rid of, get rid of the lands. Money, money, money,” Leacock said.

Leacock said some of the best lands in Bequia are being sold at high and prohibitive prices to fuel the construction of the five-years-overdue EC$729 million Argyle International Airport.

“And Bequia people would, for a long time, not be able to own a part of what is Bequia,” Leacock said of the northern Grenadines island, where investors last month began and promising “private-island style privacy” at a development slated to commence this month.

Prime Minister Ralph Gonsalves is expected to officiate at the groundbreaking of an “exclusive collection of new beachfront homes” at Firefly Villas on Bequia.

The development by Bequia Development Ltd., headed up by Johan Liljefors, will include villas with a US$630,000 price tag, designed by Swedish architect Olle Rex.

Construction of residences will then begin in early October 2016, 7th Heaven Properties, the leading sales agency for the development, said in a press release.

He said Vincentians on St. Vincent Island must open their eyes to determine when such a situation will arise.

“You think any foreigner who is coming to our land and has an interest in Mt Wynne-Peter’s Hope doesn’t see the sea as an exclusive. They may say and do all that is necessary to acquire the lands today and wait until tomorrow, to remind us, as they have done in Canouan, ‘get off of my island’.

He said Ben Exeter, the NDP’s candidate for Central Leeward, where Mt Wynne-Peters Hope is located, has made the point that there is little value added that would accrue to the people of Layou and Barrouallie for the sale of the lands in Mt. Wynne-Peters Hope.

Leacock said residents of the district do not have to go too far to determine how many farmers are better off because of the existence of Buccament Bay Resort, which was constructed on farmlands and has been experiencing financial problems.

“Ask the people who used to catch tri-tri as a way of life in Buccama whether culturally they advanced as a people,” Leacock said, using the colloquial name for the areas where the resort is located.