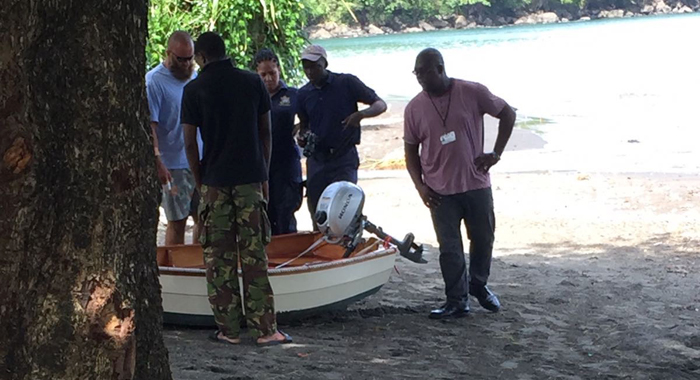 The injured Frenchman, right, and police in Chateaubelair this week. (IWN photo)

A French national pulled up anchored and sailed out of Vincentian water after being treated for injuries he sustained during a cutlass attack on board a yacht that was anchored in the Chateaubelair-Richmond area on Tuesday.

The injured man is Andri Khokhlou, captain of the yacht Kitrida.

Reports are that three men used a rowboat to enter his boat during the pre-dawn hours and Khokhlou injured during the ordeal.

An abandoned rowboat was later found in the water off the North Leeward town with a cutlass inside.

The visiting yacht man was treated at the Chateaubelair Hospital and released.

In March, Martin Griff, a 49-year-old accountant of Germany, died when unknown assailants attacked him aboard a yacht at Wallilabou, shooting him in the throat.

One reply on “Frenchman injured in yacht attack in North Leeward”