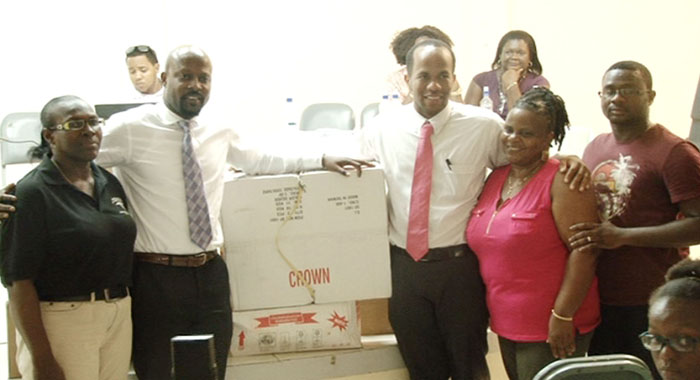 Staff and patients at the Chateaubelair Hospital will be more comfortable thanks to a donation of medical supplies and a new Smart Hospital earmarked for construction in the North Leeward constituency.

The donation of medical supplies was made by government senator and Deputy Speaker of the House of Assembly, Carlos James, at a consultation with health officials and residents this month at the Chateaubelair Learning Resource.

James said the donation was timely as the health ministry makes final preparations to relocate the hospital to a nearby resource centre to commence the retrofitting of the hospital into a new smart healthcare facility.

The donation, which included four high-velocity electric fans, boxes of adult pampers, an electric oxygen tank, diabetic machines and strips, bedpans, and urinals among other medical supplies, was made possible through James’ philanthropic efforts and donor partners, including CARIMEDIX in Kingstown.

“In a few months the Chateaubelair hospital will be temporarily relocated and I thought the donation was necessary to make both the staff and the patients more comfortable during the transition,” James said.

He said the residents of North Leeward are pleased with the transformation of the hospital into a state of the art medical facility.

The Chateaubelair Smart Hospital project, which is funded by UKAID and implemented by the Pan-American Health Organisation, will be retrofitted with solar panels for renewable energy, rain harvesting tanks as well as improved functional sections for staff and patients, new maternity and pediatric wards, a pharmacy, dental and doctors stations and restrooms for the public.

James noted that this project is a welcomed initiative and thanked the personnel at the ministry of health for its quick implementation.

“Just over a year ago we spoke of plans for a Smart Hospital in the North Leeward constituency and I am pleased to see its implementation. We have a hardworking team at the Ministry of Health headed by Luke Browne and an equally strong focal point team from PAHO who are delivering this project to the people of North Leeward,” Senator James said.

James noted that the new smart hospital is part of the government’s plan to improve the delivery of healthcare nationally and North Leeward is not being left out of the mix.

The Ministry of Health has recently completed a doctor’s quarters in North Leeward as part of its overall policy to improve health facilities in the country.

The smart hospital facility is being constructed at cost of some EC$1.6 million dollars.