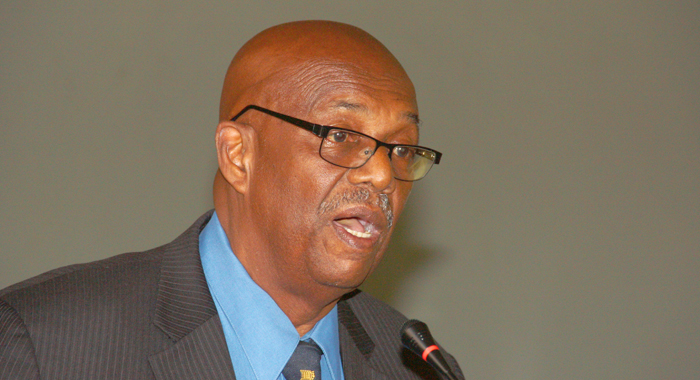 Arnhim Eustace stepped down as leader of the NDP in November 2016. (IWN file photo)

The opposition New Democratic Party (NDP) said Monday that it is important that there be a thorough, but speedy investigation into the case in which one of its spokespersons has been accused of having sex with an underage girl.

Igal Adams, host of New Times, the NDP’s daytime programme, was arrested on Friday as police investigated a report by the mother of a 14-year-old girl that he had had sex with her at least twice since 2011, when the girl was just 11.

The age of consent in St. Vincent and the Grenadines is 15.

Adams was released on Saturday without charge, and said on Monday that he is innocent of the accusation, but will step aside on a matter of principle, until the matter is disposed of.

Speaking on New Times on Monday, President of the NDP and Leader of the Opposition, Arnhim Eustace, said that it is important that the investigation be swift and thorough “as the continuation of any unnecessary lingering air of suspicion will do no justice to any of the parties involved.

“Mr. Adams has declared his intention to vigorously fight to clear his name, and we understand and appreciate that he will dedicate his time and his efforts in that regard in the coming period,” Eustace said on New Times, which was hosted, as usual on Mondays, by Bert Francois.

The NDP leader’s comments came moments after Adams announced on the programme his decision to take a hiatus.

“We make no judgement on Mr Adams’ guilt — indeed, at this time there is not even a charge laid against him. He is entitled to the presumption of innocence, until a charge is laid against him and it is heard in court,” Eustace said.

He said allegations like those against Adams “are always traumatic”.

“The alleged victim suffers the pain, fear, shame and trauma associated with the alleged event and its aftermath. Families are affected. Those accused have their lives disrupted until the allegations can be fairly dealt with in a court of law,” he said.

He said the accusation against Adams is a very serious issue that demands “a commensurate response from all concerned that is just, fair and impartial”.

Eustace said that it is in this context that he was commenting on “the larger matter here: the fundamental question about the fairness and impartiality of the justice system in this country.”

He noted that a few weeks ago in Brooklyn, New York, Vincentian citizen Miranda Wood, stood up in a town hall meeting and, in front of dozens of witnesses, accused Dr Ralph Gonsalves of sexually assaulting her when she was a minor.

He noted that in 2008 a female police officer on security detail at the prime minister’s official residence alleged that sexually assaulted her on the compound one early morning.

Eustace further mentioned a similar allegation made by a Canadian human rights lawyer, who alleged that Gonsalves sexually assaulted her in January 2003 at the Office of the Prime Minister, which she was visiting on business.

“It is also a matter of public record that, despite the fact that there is no statute of limitations on rape or sexual assault in SVG, Dr. Gonsalves was never, at any time, ever requested or required by the police to present himself for questioning.

“Indeed, at the time, Dr. Gonsalves was the minister with responsibility for the entire apparatus of the police, national security and justice — and was therefore in a situation of a pure conflict of interest, from which he ought to have stepped aside. Any decent leadership, concerned with justice, fair play and impartiality, would have demanded nothing less,” Eustace said.

In the case brought against Gonsalves, the Director of Public Prosecution took over and discontinued the private criminal complaints, citing a lack of evidence. His decision was upheld on appeal.

Gonsalves has maintained his innocence, saying that he gave the police officer “a reassuring kiss”.

Eustace noted that in relation to the allegations against Gonsalves,

lawyer and political activist Jomo Thomas, who is now the Speaker of the House of Assembly, is on record as saying that, if he — Jomo Thomas — or anyone else had been accused of sexual assault, the police would have taken him away.

The opposition leader also pointed out that Thomas has wondered out loud if justice has two faces in St. Vincent and the Grenadines.

Eustace said that if an “ordinary” Vincentian had been accused as Gonsalves was, the matter would have been followed up by the police, and that Vincentian might very well have been taken into police custody.

“The lesson for all of us in these matters, is that justice must not only be done — but be seen to be done — no matter who is involved.

“We, therefore, must use this latest development to open up a fresh debate about the dispensation of justice in St Vincent and the Grenadines, and what is seen by many ordinary Vincentians as the corruption of the system by undue political interference,” Eustace said.