Woman watched in shock as stranger murdered her boyfriend 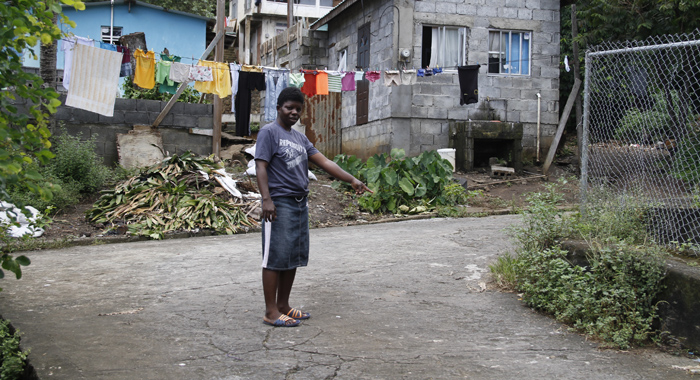 Shellyann Parris points to the spot along the Cocoa public road in Campden Park where her boyfriend, Nicolas Layne, was killed. (IWN photo)

A Campden Park woman watched helplessly in the South Leeward village Sunday night as a stranger attacked and stabbed her boyfriend then drop stones and bricks onto his head until he died.

The woman, Shellyann Paris of Campden Park, told iWitness News that she and her boyfriend, Nicolas Layne, 35 of Edinboro, where at Cocoa Circular Road gap in Campden Park waiting for a van for him to go home.

She said his hair was curly and he had a lot of clothes in the backpack.

Paris said the man was smoking a “spliff” (marijuana cigarette) and when he was done, he tossed the butt on the ground.

As a minivan passed by, he attempted to stop it by running alongside the moving vehicle and banging against it. The driver, in response, sped off Parris said, adding that the man then turned back to retrieve the jersey that had fallen while he was trying to stop the van.

Parris told iWitness News that she was concerned about the behaviour of the man and told her boyfriend that they should go back in the direction of her house — several hundred yards away.

She said she told Layne that the stranger appeared to be on “some scheme” (up to no good) because he was behaving as if he is crazy.

Layne, however, refused to go back to her house, saying that he had already walked all the way to the main road.

Parris told iWitness News that the man, who she was seeing for the first time in her life, began pacing back and forth along the section of road where she and her boyfriend were sitting.

She said she again told Layne that it seemed like the man was on “a scheme” but he again said he was not going back to her house.

Parris said that as she became increasingly uncomfortable, she took off her slippers.

She said the man then pulled out a knife out of his bag and showed it to them and she ran through a villager’s yard and into her house.

Nicolas ran along the public road and appeared to have slipped and fallen when he got to one of the curves along Cocoa Circular Road.

Layne was crying out, but not very loudly, said Parris, who told iWitness News that she had to take a while to catch her breath before telling her family that they had been attacked.

She said that as Layne was lying on the road, the attacker went in a nearby yard and got a stone and dropped it on his head.

He then sat for a few moments, apparently watching to see if Layne had died.

He repeated this twice, then walked away casually, Parris told iWitness News.

“When he done do it, he ain’t run. He just walked and go up,” she said, adding that while she was crying, none of the neighbours came out during the ordeal.

She said that she, her mother and stepfather as well as her adult brother were at home during the attack but none of them attempted to help Layne because they were too afraid to do so.

Police say they believe that Layne’s attacker was Jurani Baptiste, an 18-year-old Sandy Bay resident who is believed to have killed three other persons that night in a similar manner in Old Montrose and Kingstown Park.