House set on fire; occupants shot at as they escaped 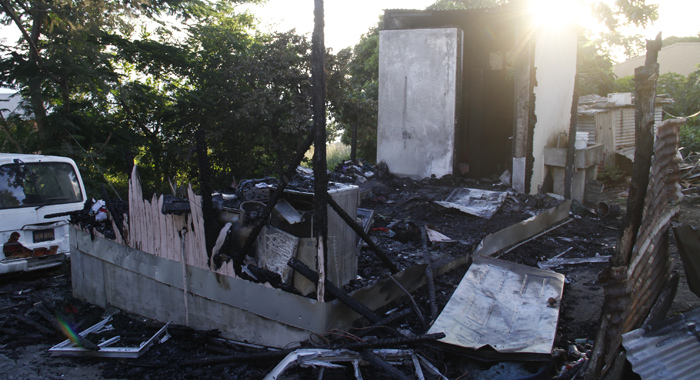 The burnt out house in Upper Questelles. (IWN photo)

A house in the South Leeward village of Upper Questelles was set on fire Sunday night and the occupants shot at as they attempted to escape the inferno.

The blaze at the wooden house, which had a concrete bathroom, began sometime after 2 a.m. Monday, residents of the village said.

iWitness News understands that the occupants of the house were Kimani Williams, of Upper Questelles, as well as Rillan Hill resident, Jamalo Dunbar, who is in his late 20s.

iWitness News understands that Williams, who is said to be his late 30s or early 40s and is also known as “Triple Gold”, was shot to the left side as he escaped the burning house.

Williams underwent surgery on Monday but iWitness was unable to determine his condition.

Residents of the area said they hear several gunshots and saw flames at the house when they went to check on what was happening.

The house is believed to have been set on fire using Molotov cocktails, known locally as “flambeaus”.

Two fire engines responded but were unable to save the burning building.

2 replies on “House set on fire; occupants shot at as they escaped”