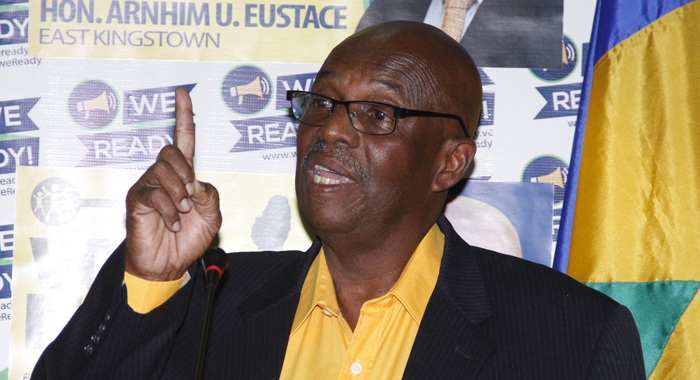 Members and supporters of the main opposition New Democratic Party (NDP) have been told to beware of the ruling Unity Labour Party’s (ULP) divisive tactics as the NDP transitions to new leadership.

Outgoing president of the NDP, Arnhim Eustace, who was on Monday replaced by Member of Parliament for the Northern Grenadines, Godwin Friday, as Leader of the Opposition, made the point Tuesday night in his farewell address to party supporters.

His call comes ahead of Sunday’s election of a new president of the NDP, which Eustace said will be a contest between Friday and fellow vice-president, St. Clair Leacock, MP for Central Kingstown.

“As we move to our next phase, I want to warn all of you about the desire of the ULP’s leaders to divide and rule us, so that they can share the spoils among their tight circle of family and friends,” said Eustace, who has led the NDP since October 2000.

“The ULP has spent an entire decade and a half trying to run me down, and now that I have decided to leave on my own timing, they want to shed crocodile tears,” said Eustace, who announced to his party one week earlier his decision to step down and party and opposition leader.

“The ULP’s only mission is to try to destroy us in order to plunder SVG with impunity — and we must understand this clearly,” Eustace said, adding, “Tell them to keep their mouths out of our business. Tell them to sit back and learn from us how democracy works.”

He said this and the next generation of Vincentians will, no doubt, judge both party’s movements.

“And when the history of democracy in this country is written, it will show that the NDP always led the way.”

Eustace said that he wanted to remind his colleagues that Sunday’s vote for the new president is “a contest among friends; friends who are united in the cause of liberating St. Vincent and the Grenadines.

“I will take it as an attack on my legacy if this race degenerates into finger-pointing, wild accusations, vitriol, lies and bitterness. I did not resuscitate and reinvigorate the dying party I inherited to have it torn asunder by intrigue and rancour,” he said.

“My colleagues will fight a good, fair democratic battle; and then come together afterwards to fight the war to ensure good governance, transparency and prosperity for all of St. Vincent and the Grenadines.

“I want to thank each and every one of you who has kept the faith — sometimes against all odds — these past 16 years. You have always lifted me up; and on any occasion that I faltered you carried me. Your prayers and your well wishes have kept me safe,” Eustace said.

One reply on “As NDP selects new leader, Eustace warns against ULP’s ‘divide and rule’ tactics”