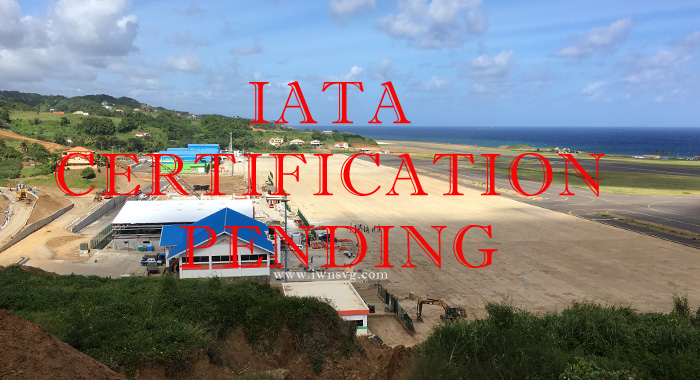 Only chartered international flights will land at Argyle International Airport until it receives certification from the International Air Transport Association, a trade association of the world’s airlines that supports airline activity and helps formulate industry policy and standards.

But Glen Beache, chief executive officer of the Tourism Authority, said he is confident that the airport will receive full certification from the Eastern Caribbean Civil Aviation Authority (ECCAA), a civil aviation authority serving the Organisation of Eastern Caribbean States (OECS).

Argyle International Airport, which has been under construction since 2008, will begin operation on Feb. 14, with a chartered flight from Toronto and New York, respectively.

Beache said on Boom FM on Wednesday that the airport is about 95 to 97 per cent complete, adding that work will still be ongoing when the airport opens.

He said one hangar is to be completed and some “small things” like one of the security check-in machines to come in, adding that these have to be in St. Vincent on the Feb. 14 when the airport opens officially.

“So, for it to get on the system, the international system, because one of the problems right now, once you open on the 14th, this is not that you are keeping E.T. Joshua. E.T. Joshua fails to exist on the 14th. So the code, the SVD code transfers to Argyle. So that’s a bit more difficult than opening a new airport.”

Beache said he guarantees that ECCAA will give full approval of Argyle International Airport but said he is not the best person to speak about the process.

“I know the basics. I don’t know the intricacies of it,” he said.

While many persons are looking forward to the opening of the airport, Beache noted that there would be no public access to the passenger facilities.

“We will be operational on the 14th,” he said, and pointed out that there would no tour of the terminal building as well as no access to the apron.

“Because we will have all the security. We will be fully operational on the 14th.”

He pointed out that for chartered flights, the airport does not need the clearance from the Unites States Transport Safety Administration (TSA).

“But TSA should be in here by the end of February to do their checks because we have to be up and running for them for them to come and do their security checks.

Valentine flights to Argyle could cost taxpayers half million