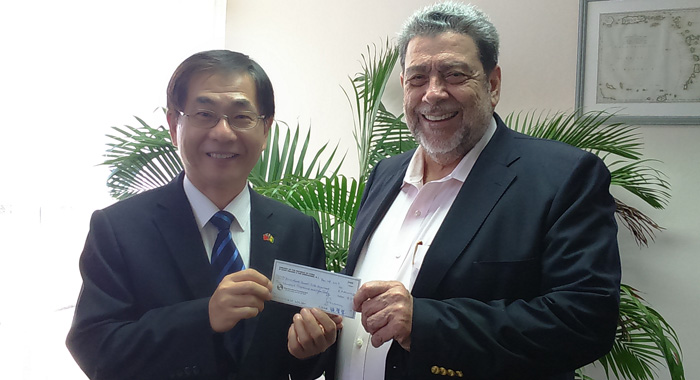 Taiwan has contributed to the repair of feeder roads in St. Vincent.

The monies will assist in the second phase of the rehabilitation of the Majorca feeder road in Marriaqua and Java road and river defence in South Rivers, which are scheduled to begin this year.

“The government and people of the Republic of China (Taiwan), taking note of the severe damage of the said roads and river defence during April 2011 and December 2013 floods, had previously contributed US$608,642.59 (EC$1,636,153) in July 2014 for the first phase of the rehabilitation project,” the Taiwan embassy said in a release.

Prime Minister Gonsalves expressed his appreciation to the government and people of Taiwan for the continued support extended to St. Vincent and the Grenadines in various fields, including infrastructure development.

“The Embassy of the Republic of China (Taiwan) recognises the importance of the rehabilitation projects that affect the daily life and safety of the people in the area of Marriaqua and South Rivers, and is, therefore, keen to witness a swift completion of the work,” the release said.

One reply on “Taiwan donates to feeder road repairs”