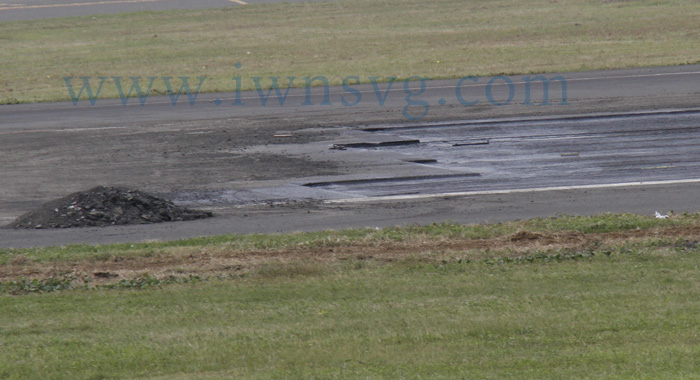 Large sections of the runway have been removed. (iWN photo)

The work being done on the runway at brand new Argyle International Airport is to correct “weak areas”, Minister of Transportation and Works, Sen. Julian Francis said on Thursday, one day after iWitness News broke news about the development.  (Scroll for video)

The work is being done even as the Eastern Caribbean Civil Aviation Authority gave approval two weeks ago for the airport to begin operating on Feb. 14.

Francis, speaking on radio on Thursday, said that “weak areas” were discovered as workers were grooving the runway to prevent hydroplaning.

Aquaplaning or hydroplaning by the tires of a road vehicle, aircraft or other wheeled vehicle occurs when a layer of water builds between the wheels of the vehicle and the road surface, leading to a loss of traction that prevents the vehicle from responding to control inputs, according to Wikipedia.

The works minister said that not a lot of runways in the region are grooved but it is now becoming part of preparing a runway.

“In the process of grooving, the guys reported that there were one or two weak areas in what is called the wearing coat, which is about two inches of asphalt from the top…”

He said a specialist was brought in from Trinidad to look at the areas “and he said we have some weak material in certain areas.

“We didn’t have to do it right away but it could have deteriorated and we would have had to do repairs on the runway sooner rather than later. So we decided that we would do it now before we open the runway,” Francis said.

He said the paved area of the runway is just under 204,000 square metres.

“And the area that we are repairing now or replacing is 7,800 square metres. So it is about 3 per cent, close to 4 per cent of the paved area of the runway.”

He said the taxiway, however, was not grooved and is not being repaired.

“So that is what is happening,” he said, adding that the repairs should be completed by the weekend.

“The integrity of the runway is not in question. The sub-base and base is solid and it is just the top wearing coat.”

He said work on the repairs was suspended around 7 p.m. Wednesday because of the heavy rains.

“We had about 40 tonnes of hot mix that we had to take back to the plant, which BRAGSA is using today (Thursday) to fill some potholes throughout the country, throughout the Windward Highway in particular and today, with the sunshine, we have beautiful sunshine these days, we are sticking to paving during the day. We are repairing, getting it prepared and paved while the sun is hot…”

He said the lab at the International Airport Development Company (AIDC), the state firm responsible for the construction of the airport, was able to identify the areas where that particular material was used.

The works minister said that during the course of preparing the runway, there was “some problem with dusting and so on”, adding that after they had reduced the crushing, the dusting volume had reduced as well.

“So we got some alternative dusting and each batch of hot mix that was laid on the runway is logged,” he said, adding that this makes it easy to identify the areas where that material was used.

“And it matched with what the specialist who came in from Trinidad and the guys who are also specialists in preparing runways who brought it to our attention.

“So, to show you the thing is above board, there is absolutely nothing wrong with the runway,” Francis said.

On Wednesday, spokesperson for the IADC, Jennifer Richardson, told iWitness News that she was aware that some work was being done on the runway, but she was not sure what was being done and why.

The EC$729 million airport will open on Feb. 14 — six years behind schedule.

8 replies on “‘Weak areas’ in Argyle runway being ‘replaced’ — Francis”