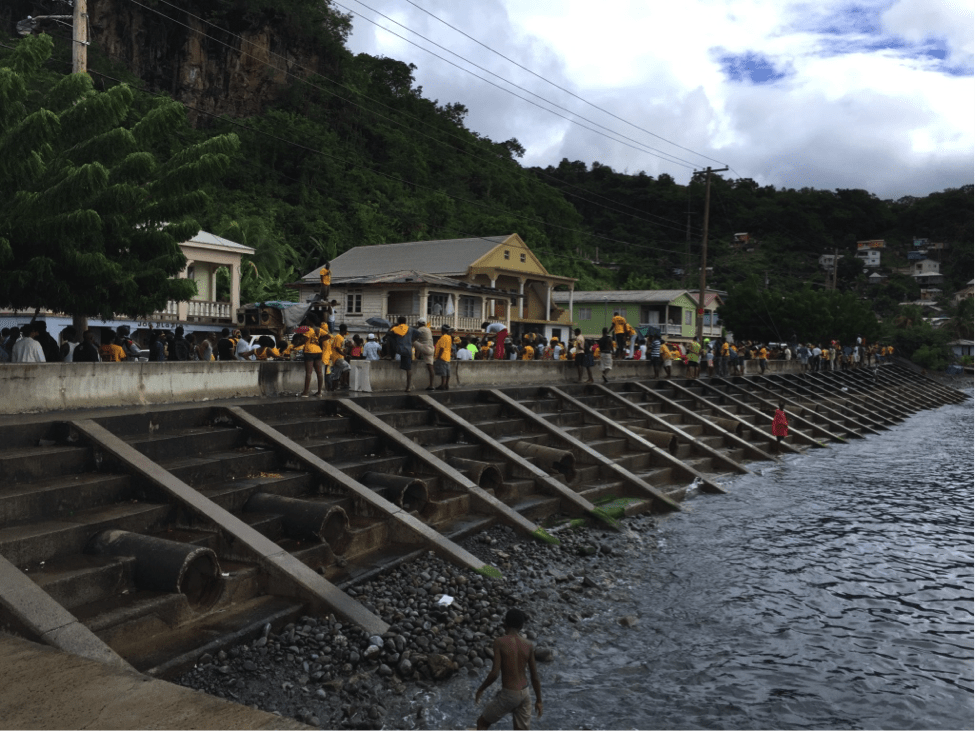 The beachfront portion of the reclamation project in Layou completed in 2006.

The long overdue decision of the government of SVG to ban styrofoam products, effective May 1, 2017 (http://www.iwnsvg.com/2017/02/07/st-vincent-bans-styrofoam-products/ ), as welcome as it is, will do nothing to reduce the rampant pollution of our gutters, streams, and unsupervised public and private properties by all manner of unwanted produce.

I base this comment on the following recent observation from the scruffy town of Layou where we often stop to look for fish on the way to bathe at Mt. Wynne or Cumberland, supplemented by the idiom, “You can’t teach an old dog new tricks.”

On an early morning drive along the Layou bayside last week, I spotted several people near the jetty and assumed fish were being sold. This was not so though a few small boys, school truants no doubt, were fishing with hook and line off the pier. As we turned to leave, I glanced at the large drains fronting the huge retention wall completed 11 years ago in response to road flooding due to beach erosion, much of it caused by generations of personal and commercial sand and stone mining, a process that continues unabated at Jackson’s Bay and adjacent Bambareaux, presumably with the benign neglect of the area’s representative, Sir Louis Straker, who lives in an opulent mansion within eyeshot of the beach.

Below are some photos of the rampant dumping of styrofoam containers, presumably thrown in the drain after the consumption of our new national dish — fried chicken and chips — bought at Edmund Durham’s shop across the road. Though it is popular fast food outlet, Mr. Durham, as far as I know, has never seen fit to provide a garbage bin for his customers.

The photo above shows the back part of the reclamation project: the retaining wall, the overflow gutter, and the pedestrian sidewalk, the latter containing two of the concrete benches and one of several concrete garbage containers (shown under the lamppost) that were installed as part of the project. The benches and bins have remained unchanged, presumably due to their size and weight, but the plastic garbage cans that came untethered with the latter were soon stolen, thereby encouraging the random dumping of waste ever since.

Nor is Layou much different from other parts of SVG where the wanton disposal of all manner of refuse is the order of the day.

With such a blatant disregard for our fragile environment by both a faux-nanny state and its nasty citizenry, how can we expect Argyle International Airport to attract tens of thousands more holiday visitors?