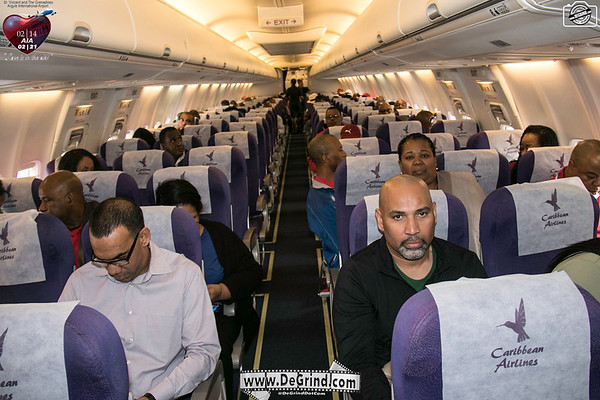 Fewer than half of the seats on the Caribbean Airlines flight was sold. (Photo: degrind.com)

The four chartered flights that offered tickets to the public brought 296 passengers to St. Vincent and the Grenadines when they landed at Argyle International Airport on Feb. 14, the day that the airport began operating officially.

The figure represents just about 46 persons more than the full capacity of the Dynamic Airways’ Boeing 767 aircraft, which created history by becoming the first non-stop commercial flight from North America to St. Vincent.

Dynamic Airways created quite a stir when it landed, bringing a number of onlookers to tears.

But immigration officials told iWitness News, on Thursday, that only 12 of the passengers on the flight, which originated in New York, were bound for Argyle.

The flight was organised by Guyana-based Roraima Airways and made a transit stop at Argyle before continuing to Guyana.

No passengers embarked for the Argyle-Georgetown leg of the flight.

In addition to the Dynamic Airways flight, two chartered flights, paid for by the government of St. Vincent and the Grenadines, also landed at the airport.

Head of the Tourism Authority, Glen Beache, had expressed confidence that both flights would have been sold out within an hour of the arrangements being announced.

Beache had said that the flight could have cost taxpayers as much as US$100,000 each, but was confident that the money would be recouped via ticket sales, adding that he was not trying to make a profit.

Only 74 passengers arrived on the Caribbean Airlines flight from New York.

The figure was less than half of the seating capacity of the aircraft, which could seat 154 passengers.

Among the passengers on that flight was Minister of Tourism, Cecil “Ces” McKie.

McKie appeared as a guest on a radio programme last week and, in response to a caller who had asked him about the number of passengers who arrived on the flights, said, “Why are we still trying to make a negative out of these things?”

The other government-organised flight was operated by Sunwing Airlines, which flew from Toronto to Argyle.

This flight was the best patronised, bringing 131 passengers, just 58 passengers shy of its full capacity (189).

The airline took seven passengers on its outbound leg on Feb. 14.

Also on Feb. 14, Roraima Airways operated a chartered flight from Cuba to Guyana, which made a transit stop at Argyle.

Gerry Gouveia, manager of Roraima Airways, had said he was looking to land a planeload of Cuban shoppers at the airport as a Valentine gift to Prime Minister, Ralph Gonsalves.

The EasySky aircraft, which can seat 149 passengers, brought 79 passengers.

Gonsalves had said that his government would bring back to St. Vincent for the opening, 60 of the Cubans who worked on the construction of the airport.

Gouveia had told iWitness News that a number of Vincentian students studying in Cuba were expected to fly home on the flight.

The outbound leg of the flight did not take on any passengers.

Dynamic Airways did not operate a return leg on Feb. 21 — the day when the three other charters operated.

Passengers were apparently turned off by the fact that they would have had to transit in Guyana for seven hours before flying back to New York — arriving in Georgetown at 9:30 a.m. and leaving at 4:30 p.m.

On the other hand, EasySky did not bring any passengers on Feb. 21 and left with 20, while Sunwing Airlines brought seven and left with 104.

Passengers on the Sunwing flight were asked to pay CAD$899 return and CAD$449, one way.

Argyle International Airport began operation on Feb. 14, six years behind schedule and with no international carrier having committed to making regularly scheduled flights to the destination.

The airport was built at a cost of EC$700 million, and has left taxpayers with a debt of EC$400 million.