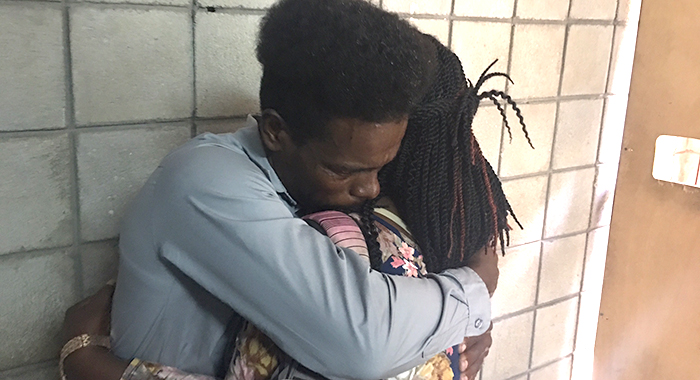 Davanan Nanton embraces his mother and cry after the Serious Offences court ruled that the has no case to answer in relation to the students’ death. (iWN photo)

The two men who were each charged with seven counts of involuntary manslaughter in connection with the death of the seven students at Rock Gutter on Jan. 12, 2015, walked out of the Serious Offences Court free men on Friday.

Seven students — Racquel Ashton, Chanstacia Stay, Glenroy Michael, Jamall and Jamalie Edwards, Simonique Ballantyne and Anique Alexander — died when minibus HL636, in which they were travelling on their way to school, careened down a sleep section of road and plunged into the sea in the North Windward community.

Nanton was the driver of the vehicle and Myers was the conductor.

The bodies of Ballantyne and Stay were never recovered from the ocean.

The lawyers, Grant Connell and Israel Bruce, made the no case submission at the end of a preliminary inquiry that stretch over 10 months, which included months-long adjournment

In giving her ruling at the Serious Offences Court on Friday, Browne-Matthias said the prosecution’s case was that the accused caused the death of the students by omission.

The defence, however, had submitted that there was nothing presented by the Crown to prove a case against their clients and had made the no case submission.

The chief magistrate said that the crux of the prosecution’s case centred around the law of omission.

She said that in that context, liability is exceptional and often and often involves an extension of the concept of causation and who owes a duty to act.

“Generally, there is no liability for failing to act,” the chief magistrate said, adding that, as in everything, there can be exceptions.

She said these include if a statutory or contractual duty is owed or some duty imposed by law.

She said that in the case, the prosecution had called 22 witnesses and for the most part, the testimony heard evolved much emotion.

Browne-Matthias, however, said that the three critical witnesses in the case were Corporal Pope, a vehicle inspect, the chief investigator, Station Sergeant of Police Junior Nero and certified auto mechanic McKinley Roberts.

She said that Pope’s evidence was that he inspected vehicle remains, supposedly that of HL636. However, there were no identifying marks on the vehicle.

Pope found on the remains a disk pad that he said was worn down to iron.

However, the magistrate noted, that the inspector was unable to say what caused it to be worn and what was its purpose.

Pope’s evidence, therefore, did not assist the court in determining if the disk pad was worn as a result of use in the vehicle or because it was battered by the waves on the day of the accident.

Nero’s evidence, the chief magistrate said, took the court through the entire investigation but failed to help the court in identifying who may have failed to act in accordance with some duty owed.

The evidence of the mechanic did not assist the court.

The magistrate therefore ruled that the accused men had no case to answer.

Myers and Nanton, along with school principal Colbert Bowen, were in late 2015 charged with seven counts of involuntary manslaughter after the completion of a coroner’s inquest into the accident.

The Crown withdrew the charge against Bowens at the commencement of the preliminary inquiry last May.

Myers and Nanton welcomed Friday’s decision and said that they hope that their community of Fancy can move beyond the hurt and pain that the tragedy has caused all involved, including themselves.