Gun, ammo cache accused to know fate on May 24 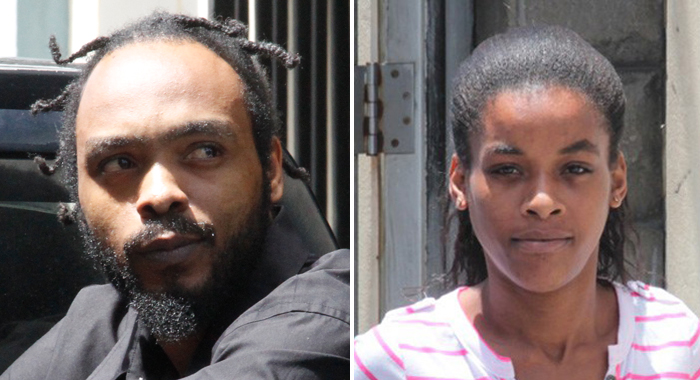 The Lowmans Bay couple that is charged with possession of a cache of guns and ammunition will know their fate on May 24.

Senior Prosecutor Adolphus Delplesche pulled out his law books and quoted the Constitution as he argued that the Crown had proven, beyond reasonable doubt, its case against Randy Shallow and Freikesha Douglas.

They pleaded not guilty to all charges when they appeared in court on Jan. 20, 2017 and were each granted EC$45,000 bail. However, no one had signed their bail bond and they have been remanded in custody.

The court heard closing arguments on Thursday after visiting the locus one day after defence counsel Grant Connell made the request.

In his closing submission, Delplesche told the court that the prosecution’s case is that police, armed with a search warrant, mounted a search at the couple’s home.

When they arrived there, there was no answer after police banged on the door for an extended period of time.

After some time, Shallow answered the door and told the investigator, detective Constable Philbert Chambers, that he did not have anything for him (Chambers) and that he (Shallow) is behaving himself.

During the search, the items were found on a window ledge.

The Crown is further alleging that Chambers found the items in the presence of Constable Miller and Corporal King, who were also members of the party.

The defendants were arrested and the guns and ammunition were further shown to them at the Criminal Investigations Department in Kingstown.

Checks at the Traffic Department found that the defendants do not have a licence to keep firearm or ammunition.

The police department’s firearms expert test fired the weapons and found them to be functional and the ammunition live.

In further presenting the prosecution’s case, Delplesche said that the defendants have lived at the house together as man and wife for four years.

The window on which the police alleged that the gun and ammunition was found is right next to their bed head, Delplesche pointed out.

He further noted that the defendants claim that they have never opened the window.

“Why are they distancing themselves from the window?” Delplesche said.

He further addressed the defendant’s claim that the police did not show a warrant to them.

Delplesche said that while the Crown maintains that a warrant was shown, even if one were not shown to the defendant, the Firearms Act allows police officers, with the permission of the Commissioner of Police, to enter a property without a warrant, if they believe that there are illegal firearms or ammunition on the property.

He further responded to the defendant’s claim that the police beat them. Delplesche said that the police said that as soon as the items were discovered, Shallow began behaving violently, to the point that he had to be placed in handcuffs and shackles.

The prosecutor said that the police admitted that Shallow was manhandled. He further cited the Constitution, saying that the police officers can use reasonable force during the execution of their duties.

Delplesche also responded to the allegations by the defendants that they received a heavy beating at the hands of the police.

The defence had attempted to prove that one of the firearms was not a Glock — as the Crown claims — and brought weapons dealer Keith Howard as a witness on Thursday.

Howard said that the firearm was not a Glock, but admitted that while he is a weapons dealer with some training in firearms use and maintenance, he is not a ballistics expert and could not say whether the weapon is capable of firing a projectile.

Delplesche said what is important is that the item is a firearm, adding that the law does not specify any make of firearm.

“I am convinced, your honour that we have made out a case beyond reasonable doubt… Every iota of evidence is pointing towards the defendants.

In his submission, Connell asked the court to take on board the evidence of police officers Chambers, Miller and King, who testified in the case.

Connell pointed out what he said were inconsistencies in the officers’ versions of what happened during the search.

He said that the police officers’ versions of what transpired at the house is so riddled with inconsistencies that Delplesche, because of his skill, was able to meander around them.

“The first hurdle is the common-sense hurdle,” Connell told the court, adding that it is physically impossible for all the items to fit on the two-inch window ledge where the police said they were found.

He further noted that no photographs were taken at the time when the items were allegedly found, adding that in this age of technology, the police officers could have used their phones to do so, in much the same way they said they did at CID for the purpose of sending the images to the police chief.

Connell further pointed out to the court that the window in the couple’s bedroom is located near a storeroom and that the landlord has the key.

He further pointed out that the landlord’s stepson also lives at the house.

“Taking the prosecution’s case at its highest, you still have a balance of probabilities and not beyond reasonable doubt,” he said.

Connell told the court that his client’s defence was affected by their inability to pay for an expert from overseas to testify.

He further said that a media worker who had attended a press conference given by the police chief in January, at which the items were displayed, was “gagged” and decided not to attend court.