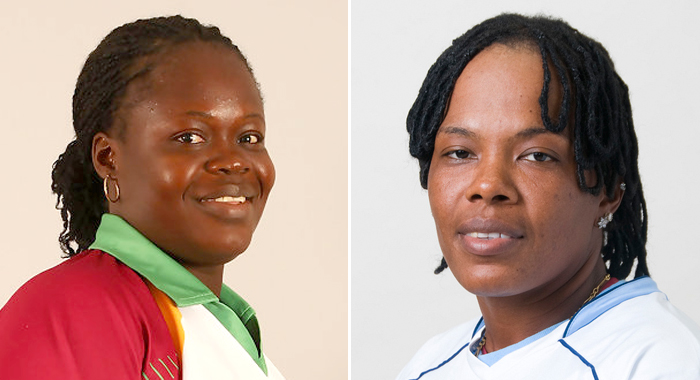 Regional selected have named four newcomers — two of them from the Windwards Islands — in a 15-member squad for the International Cricket Council (ICC) Women’s World Cup in England next month.

But the tournament appeared to have been the swansong of SVG’s veterans Cordel Jack and Juliana Nero — both upwards of 35 years old — who failed to impress.

The three Windwards representatives are Akeira Peters and Quiana Joseph, who are both newcomers, and the experienced Afy Fletcher, who will all make the trip to Europe as part of the Stafanie Taylor-led squad.

Peters, a 23-year-old Grenadian left-handed all-rounder, was one of the Windwards standout players, talent-wise, even though she was not among the leading wicket takers. Bowling with impressive pace and moving the ball off the pitch and in the air appreciably, she caused some problems for many of the batters. Joseph, a 16-year-old fast bowler from St Lucia, was also impressive in many of her spells, generating reasonable pace with skiddy deliveries that took many of the batters by surprise. Despite bowling impressively, both Joseph and Peters suffered at the hands of butter-fingers teammates, who floored a number of catches.

The pair will join their team captain Fletcher, who is also Grenadian, for the world cup from June 24 to July 23.

Fletcher, a right-arm leg-spinner, was a member of the West Indies Women’s team that won the 2016 ICC World Twenty20 Tournament in India, finishing fifth for overall wickets taken.

In the recent West Indies tournament, Fletcher was joint top wicket taker with Barbados Hayley Mathews, who both collected 15 scalps — Mathews taking her wickets at 6.60 and Fletcher at 6.20.

Fletcher was singled out by Barbados coach Henderson Springer for special mention in a post-tournament interview.

Asked if he had seen any talent in the tournament besides those who were known in the lead up to the tournament, Springer lauded Fletcher.

“Afy Fletcher is a special talent as a legspinner … she is a very good bowler and if she continues like this I expect her to be among the world’s best not too long from now,” Springer told iWitness News.

In addition to taking her wickets Fletcher, was also among the few players who were able to get a score of over 20 on two occasions in a tournament where batsmen struggled badly.

“The team is composed of a mixture of youth and experience,” said Courtney Browne, chairman of the Selection Panel.

“Performances in this year’s Women’s Regional Super50 Tournament, along with the form of incumbent players over the last few international tours, was taken into consideration.”

Boyce, an attacking player was instrumental in helping TnT to repel the Barbados pace attack in the final with an attacking innings of 29 off 30 balls with 7 fours. Walters, a stubborn right-handed batsman, is a solid player with tremendous powers of concentration.

This was borne out by her inning in the final, where batted almost 25 overs in shepherding her team to 164, which turned out to enough to retain their title. Walters made 53 off 140 balls and was seventh out. She later returned with the ball to take 3/25 from 10 overs and take the Player of the Match award as her team dismissed Barbados for 143 to win by 21 runs.

“The panel felt that we have enough experience in the side and that all four players bring a specific skill-set to the team. It should also be noted that all four players are products of our last training camp for emerging women’s players held last year. We also feel at this time that these players, although not as experienced, have shown improvement and can add value to our squad. We would encourage those that missed out to continue working and improving their skills, so that they can be considered for future tours,” Browne said.

The team shows no real surprise as experienced left-arm spinner Shanel Daley returns after some time out something noted by Browne.

“Shanel’s ability as a player has never been in question. She, however, had some injury issues over the last few years. Those issues are now under control and our medical personnel, as well as Oba Gulston, the physiotherapist for the women’s team, will continue to monitor and manage her.”

Browne also confirmed that all-rounder Shaquana Quintyne was not considered for selection, due to injury.

While SVG’s Jack and Nero both may have entertained pre-tournament thoughts of reigniting their international careers, those thoughts never materialised into reality as both players failed to do what was required.

Jack, who along with her supporters has had to strenuously defend her weight, had two good scores of 41 and 37 in her opening matches but only added 13 more runs in her other three innings.

Nero endured an even more miserable tournament with one good score of 25 in her five innings and ended up with an aggregate in the region of 50 runs.

With Jack now at 35 and Nero 38, commentators are of the view that their international careers are now at an end with their national tenure also winding down with at best another year or two.