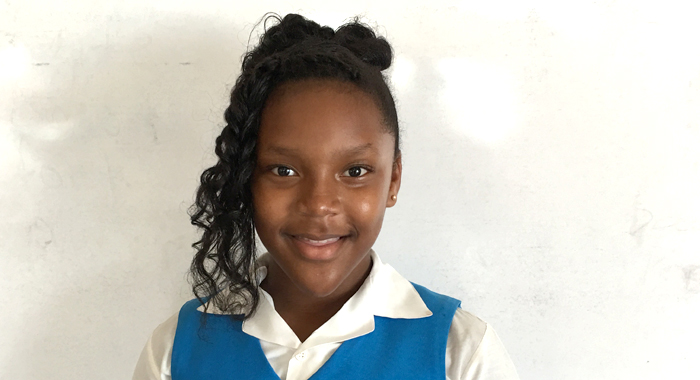 One of the two students who tied for second in this year’s Caribbean Primary Exit Assessment said she wanted to do well for her late grandmother.

Chenise Olivia Harper of St. Mary’s Roman Catholic School said that her maternal grandmother, Eileen Wyllie, who died last August, had said that she always wanted to see her go up to Girls High School with a smile on her face.

“So that motivated me to do well,” Harper told iWitness News at her school on Monday.

Harper and Genevieve Elizabeth McMaster, of the Windsor Primary, both scored 97.6 per cent to tie for second in the exam.

The top performer was Rosario Browne of the Kingstown Preparatory School, who had an average of 98 per cent.

Harper told iWitness News that she feels “good” and was not surprised by her outstanding performance.

She said that in preparation for the examination, she took extra lessons in all of the subjects and did a lot of past papers.

The Enhams resident, who is the daughter of Freddie and Denise Harper, said that she wanted to “come really high for CPEA for my grandmother”.

Harper said that she will enrol at GHS but is not sure as yet what she wants to become when she grows up.

Her father told iWitness News that “words can’t describe how I feel right now, but I feel great”.

Asked if he was surprised by his daughter’s performance, Mr. Harper said:

“Surprised!?” He pause briefly then added: “That she didn’t come first but I expected her to do very well.”

He told iWitness News that he was surprised that his daughter did not come first because of the hard work they had put in.

“The amount of nights, weekends, foregoing a lot of activities, more printing of past papers, a lot of studying, a lot; plenty,” he told iWitness News.