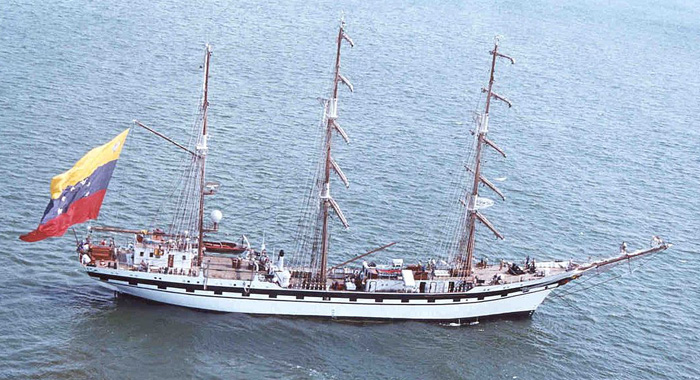 The Venezuelan naval vessel Simón Bolívar School will pay an official visit to St. Vincent and the Grenadines from today, Wednesday, to Saturday, June 17.

The ship is named after Simón Bolívar, the liberator of Bolivia, Columbia, Peru, Ecuador and Venezuela.

While in Port Kingstown there will be an official guard of honour and welcome ceremony on at 10 a.m. today at the Cruise Ship Berth. Later today, the visiting crew will play a friendly football match with the Royal St. Vincent and the Grenadines Police Force football team at the Grammar School Playing Field commencing at 4:30 p.m.

The vessel, also known as the “Venezuelan Ambassador Without Borders”, was built in Bilbao, Spain, in 1979, and has a rich history having participated in Operation Sail in 1986 and again in 2000, visiting New York City on both occasions; as such students across St. Vincent and the Grenadines through the Ministry of Education, Reconciliation and Ecclesiastical Affairs will receive guided tours of the vessel throughout the week.

The crew, which includes officers and cadets, will also tour tourism sites. The vessel will depart Port Kingstown on Saturday.