UWI lecturer against the rise of businessmen-politicians in the Caribbean 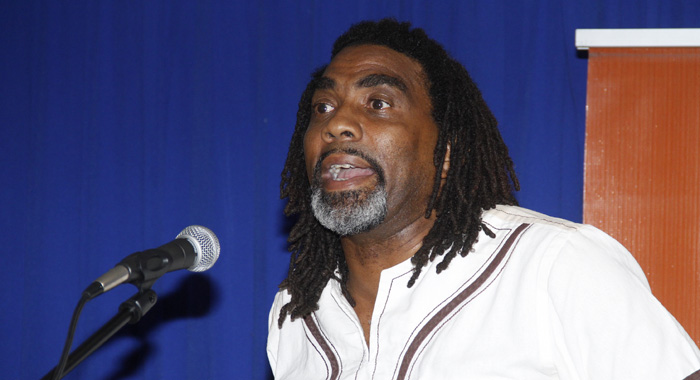 KINGSTOWN, St. Vincent (CMC) — A University of the West Indies (UWI) lecturer is warning against the rise of the businessman-politician in the Caribbean, identifying St. Lucia Prime Minister Allen Chastanet and U.S. President Donald Trump as examples of why businessmen as politicians are bad for society.

Head of the Department of Government, Sociology and Social Work at the UWI Cave Hill Campus in Barbados, Tennyson S.D. Joseph, said that the region should regard the development as “a new window for the re-emergence of the left”.

However, his theory was rejected out of hand by St. Clair Leacock, a two-term elected Member of Parliament, businessman and vice-president of the right-wing opposition New Democratic Party, who attended the public lecture on the topic “‘Any Cook Can Govern?’: Plato, Donald Trump, and the rise of Caribbean Businessmen Politicians”.

In the lecture, Joseph, who unsuccessfully contested the 2006 general election in St. Lucia against Chastanet’s United Workers Party (UWP), rejected 20th century Trinidadian intellectual CLR James’ theory that any ordinary person can become a leader and argued instead in support for Greek philosopher Plato’s view that businesspeople should not be political leaders.

“There is much evidence in the politics of the USA, the Caribbean and elsewhere that the election of persons with business experience, and the election of persons who fail to understand that political leadership requires a specific nobility of character, has compounded, rather than resolved the challenges of governance or development. It is clear that not any cook can govern,” Joseph told the audience attending the second in a series of lecturers organised by the UWI Open Campus, and LegalEase SVG Inc.

Joseph said he was moved to think about the specific questions that he addressed in the lecture when in April 2016, “an untried and untested son of a St. Lucian businessman, Allen Chastanet, emerged as Prime Minister of St. Lucia after successfully wresting power from Dr. Kenny Anthony”.

Joseph sought to present Chastanet as an incompetent leader and showed a news clipping of the prime minister experiencing great difficulties piloting a bill through the nation’s national assembly.

He further said that among “the clearest examples of his narrow association of politics” was Chastanet’s decision to contract a private accounting firm to prepare St. Lucia’s 2017 budget.

Joseph further said that the prime minister justified the decision on the basis that the public sector had limited knowledge of new and modern approaches to taxation.

“Whatever the explanation, this begs the question of the appropriateness of conceding such wide swathes of public responsibility to a private firm to determine the revenue and expenditure priorities of a democratically elected government. Further, whilst an elected government would be guided by notions of public accountability, a privately contracted accounting firm is not obligated to be informed by similar considerations,” Joseph said.

Joseph, who confirmed that he had work as Anthony’s political attaché between 2000 and 2003, said that on sober reflection “both Chastanet and Trump’s victories were the result of the same architectonic structural and ideological issues reflecting themselves in contemporary early Twenty-first century politics”.

He said that both the St. Lucia and United States elections were fought on the basis of “an electorate frustrated with established politics, with voters opting to vote for ‘something new’”.

He further posited that on the basis of the ideological hegemony of neo-liberalism, both the St. Lucian and U.S. electors assumed that their countries’ challenges could be resolved by business persons rather than by so-called “professional politicians.

“However, since the elections both countries have experienced ‘disnormative’ political developments largely arising out of the political inexperience and the crude application of the ideological “business-oriented” concerns of the respective leaders, but these failures themselves are symptomatic of deeper crises confronting capitalist democracies in the present and are manifesting themselves most clearly as failures of leadership,” Joseph said.

Regarding the future, the UWI lecturer said that he believes that the current moment calls for “a more heightened degree of political activity from the historically progressive social democratic forces of the Caribbean.

“The present moment, in contrast, is one of both of optimism and pessimism. The pessimism lies in the concrete reality of the actual takeover of our politics by the business class and represents a moment of triumph of neo-liberalism in which its theoretical claims are being backed up by political victories.”

Dialectally, however, Joseph said, the moment presents itself as a simultaneous moment of collapse and defeat of neo-liberalism, noting German philosopher Friedrich Hegel’s reminder that the highest stage at which something can reach, is the stage at which it begins to perish.

“We are also informed that something — an idea a social formation or an institutional principle — can only be said to reach its highest stage when all its principles are taken for granted. The full negative effects of capitalism had always been mediated by its social veil in which political power was transferred into the hands of the non-bourgeois technical managerial class.

“However, when, as in the present moment, the bourgeoisie seeks to govern directly without the mediation of the technical managerial middle class, we are indeed in the highest stage prior to the moment of collapse,” Joseph argued.

He said that there are myriad signs to suggest that Trumps moment of victory, coincides with the moment of the collapse of the United States’ capitalist world leadership.

“Similarly, the emergence of the CEO politician in the Caribbean is coming after several decades of crisis of post-colonial development when the independence project appears to have lost its steam and has entered crisis.

“Chastanet and the business class represent the symptom and not the solution to that crisis. For the last four decades Caribbean social democracy has been beaten back and lost its voice. My message to the Vincentian and Caribbean progressive forces, is that we should see the moment, not as one of defeat, but as the opening of a new window for the re-emergence of the left, as the business politicians demonstrate concretely that they cannot resolve a crisis which was caused by the very class to which they belong. It is now time for the left to re-emerge,” Joseph said.

But, speaking in the open forum, Leacock told Joseph that he rejects all his conclusions “totally out of hand as an absence of serious political science”.

“The expansive detail on St. Lucia’s situation, unfortunate, regrettable — Chastanet’s challenges, I am not here to defend or promote — but it is difficult for me to accept that the St. Lucian experience finds a generalisation in Caribbean politics or international politics.”

Leacock told Joseph that he found his treatment of leadership to be “very shabby and totally absent of academic research. It is different for me to find how you can ground that. I don’t find the triangulation that should be present and the conclusions are very, very narrow.”

But Joseph said that Leacock gave “an emotive response” to the lecture and not “an intellectual critique of it”.