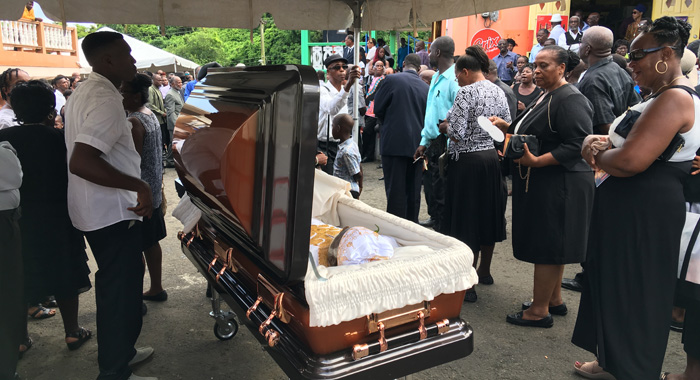 The funeral service of social and political activist Oscar Allen was held in Kingstown on Saturday, but it was in his home community, Diamonds, where he was buried, that the most heartfelt tribute — totally unscripted — was paid to him.

iWitness News visited the South Central Windward village Saturday evening, where the public viewing of Allen’s body took place at the Earlene Horne Square, immediately before his burial at the New Adelphi Cemetery at Diamonds Village.

Scores of persons turned out to pay their last respects to the 75-year-old man who died at the Milton Cato Memorial Hospital on July 28, one week after undergoing surgery to his large intestines.

At the Earlene Horne Square, Ian Williams, a lecturer at the Teachers Division of the St. Vincent and the Grenadines Community College, told iWitness News that it was very important for him to be there on Saturday to pay his last respects to Allen.

Williams, a resident of the neighbouring community of Lowmans (windward), said that it was “a little strange” that he had referred to Allen in his Aug. 3 class to illustrate the historical importance that the descendants of former slaves placed on education.

He said that during the class, he was reflecting on Emancipation and noted that Allen had been part of a panel discussion commemorating the 40th anniversary of the college.

And in that discussion, Allen said that just after Emancipation, the planters offered the former slaves work on the plantations and offered them incentives. However, none of the parents agreed, but insisted that the children go to school, Allen had pointed out.

“And I was referring to what is happening today. Back then, the parents insisted that the children go to school, whereas today, you have some parents, many years after Emancipation, who are not insisting that the children go to school. So I was using that as an introduction to the people who are being trained in that diploma programme,” Williams told iWitness News, adding that the following day, he learned that Allen had died.

“He was really a person who was very conscious of the community and what it involves,” Williams said of Allen, adding that the fallen activist wanted to see St. Vincent and the Grenadines and its various communities go well.

“I really needed to be here to pay my last respects,” Williams said.

“He has more like a father to me. He was a teacher, advisor, … he was not judgmental; but most people will know him as very humble.

Dublin told iWitness News that she saw Allen as “a neutral force” in the community and expressed fear that now that he has died, the community might not be able to maintain its unity in the face of the entrenched and deepening political divide across St. Vincent and the Grenadines.

“He was what was keeping everybody together,” she told iWitness News.

Another Diamonds woman, who gave her name as Verna, described Allen as a “generous and a loving and caring gentleman”.

She said that in the early 1960s when he came to live in Diamonds and people discovered “there was this gentleman living up there”, she and other children saw the older gentlemen from the Village going to visit him.

Propelled by the inquisitiveness of childhood, Verna and other children went to Allen’s house and he came out and interacted with them.

“So, his house was a place where we go. He taught us how to make banana porridge, plantain porridge, eddoe porridge and other little goodies like fried plantain chips and other fruit juices.

“You could have gone to him and speak to him if you had a problem, he would counsel you,” Verna told iWitness News.

Before joining another denomination, Verna used to worship at the Methodist Church, where Allen was a minister, so she interacted a lot with him there.

“He was very interactive, he shared the gospel and he was always a very good preacher. And when he preached, at the end of his sermon, he would still come back and simplify the message for you if you didn’t understand.”

Also paying tribute to Allen was Azuba Cordell Nashaka Jackson, who, like most persons born in Diamonds in the 1970s and 1980s, Allen named.

Jackson told iWitness News that when Allen died, her mother informed her by telling her that the man who named her has died.

“Mr. Allen … encouraged me,” Jackson said, adding that he inquired about her education every time he saw her.

“He was humble. He stood up for what he believed in and although he was a politician, he was for the people and of the people and when I got the news on my bed, I cried that night. I couldn’t sleep again because it was like you lose somebody important from the village. When I look up there, I won’t be seeing him.”

Jackson said that when she was unemployed for five years she found some old history books at home and told Allen about them.

Her uncle had bought Nelson Mandela’s “Long Walk to Freedom” so Allen told her to exchange with him and gave her books to read when she was at home.

“This man, he was simple and he had a Christ-like persona; nothing troubled Brother A, especially material things. I could say that he has left a void and as I said on Facebook, he was truly a village icon.”

Meanwhile, Minister of Agriculture, Saboto Caesar, who is also from the area, told iWitness News that Allen was “a community-spirited man, a man who dedicated his entire life to the village of Diamond and also other communities in St. Vincent and the Grenadines and the region. He would definitely be missed.

“He participated as a farmer, a father, he mothered many causes — a community activist, politician, really, he was a pillar of strength in the community and he definitely will be missed.”

“Just being around him, he spoke to you without using words. He was a disciplinarian; he also was an academic who taught us to read a lot, to write a lot. He was also a very spiritual person and that resonated with us,” Caesar said.