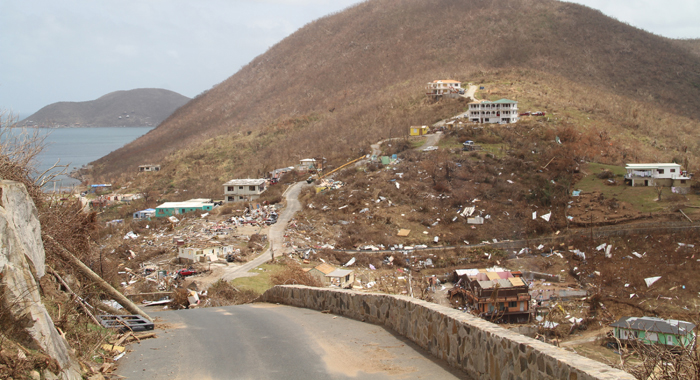 There is widespread destruction across Virgin Gorda. (CMC photo)

Vincent Wheatley, the Sister Islands Programme Coordinator in Deputy Governor’s Office, made the call even as several Caribbean Community (CARICOM) nationals, including those from St. Vincent and the Grenadines and Guyana were among other non-BVI nationals being housed in a community centre that had been stripped of its roofing shingles.

The building is at risk of being flooded if it rains, as only the woodwork on the roof, which was damaged in some areas, are protecting the occupants of the shelters from the elements.

Wheatley told the Caribbean Media Corporation (CMC) that about 100 people remain in shelters on the island, which has a population of 3,500, a large number of whom are expatriates.

A Caribbean Disaster Management Agency (CDEMA) team deployed to do a rapid needs assessment on Virgin Gorda on Tuesday found that between 70 and 80 per cent of the housing stock was destroyed or damaged so badly that they are uninhabitable.

Wheatley said that so far, there have been daily evacuations mainly to America and European countries, through helicopter service and a boat service to Puerto Rico.

“We’ve had none to the Eastern Caribbean countries because LIAT hasn’t been able to fly but we have been told that by Thursday or Friday of this week, LIAT plans to start the service to like Antigua and St. Vincent and the rest of the Caribbean,” he said.

“We are going to encourage all nationals who can’t survive here, who can’t find work to please go back to your respective countries and come back at a later date. Those who are willing to stick it out with us, we encourage those able bodied persons to please stay and help us rebuild,” Wheatley said.

Wheatley, who has general governmental responsibilities on the islands outside of Tortola — mainly Jost Van Dyke, Virgin Gorda, and Enegada — told CMC that Virgin Gorda has been totally “demolished” by Hurricane Irma.

“It’s the worst thing we have seen in a very long time. One word describes Virgin Gorda right now: catastrophic.”

Irma has been blamed for the loss of five lives in the BVI, but Wheatley said there were no deaths in Virgin Gorda and no major injuries.

“A lot of folks are without homes, a lot of folks have lost all their possessions, including myself,” he said, noting however there is still a lot of food and water, thanks to their partners, who are donating.

Two shelters are operating, one at the Methodist Church in North Sound and the Catholic Community Centre in The Valley.

Wheatley chairs the group and there are 12 subcommittees, looking at things like electricity restoration, shelters, food distribution, and acquiring food from outside the jurisdiction.

On Tuesday, Governor Augustus “Gus” Jaspert and Premier D. Orlando Smith visited the area and Wheatley briefed them on what was done over the last week and the plans moving forward.

He said he asked the premier to allow them to keep the structure in place and that all outside help should be funnelled through the committee.

“It is a very solid and workable structure. It has been very functional and very effective for the last week,” he said, adding that Tuesday’s was the second visit from government officials since the hurricane.

Several businesses have been proving drinking water three times a day to residents of the islands, but they need bottles in which to store the water.

“We also have fuel on the island but the fuel needs to be secured to prevent looting,” he said, adding that while there has been some level of looting on the island, it is “not terribly widespread”.

In terms of reconstruction, the immediate need is for plywood, concrete nails and water.

“It has been very frustrating for people in that we have had no outside help from the government. But since we have come together and organised ourselves, we have brought hope to the people.

“And seeing the premier here has shown we are going to be ok now. Hope is coming back, the level of hope. People are a bit frustrated, but we are doing our very best.”

Wheatley said the main focus at the moment is cleaning up, adding that a makeshift dump was created for metal. The authorities are hoping to begin providing counselling to survivors on Wednesday.

But amidst the effort security is a major concern for Wheatley and his committee, particularly looting.

He told CMC that he had requested extra help from the British Navy, in the form of 30 military persons to assist with security concerns.

“The prisoners are out and we have a few on Virgin Gorda also,” he told CMC.

The prison located on Tortola was destroyed in the storm. Some of the prisoners have made their way to Virgin Gorda and Wheatley said he has told them to ensure that they report to police every day.