Storm watches to begin for SVG at 2 pm today 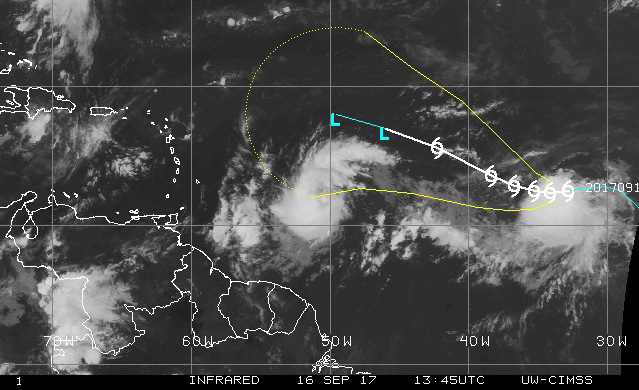 Watches are expected to begin at 2 p.m. today (Saturday) for St. Vincent and the Grenadines (SVG) as forecasters continue to monitor a potential cyclone that is expected to be named Tropical Storm Maria by nightfall.

At 11 a.m., the disturbance was centred near latitude 12.2 north, longitude 50.5 west, moving toward the west near 22 mph (35 km/h). A slower west-northwest motion is expected during the next couple of days, approaching the island chain on Monday.

This comes even at the SVG Meteorological Service continues to monitor Tropical Storm Lee in the Atlantic Basin and the potential cyclone closer to the island chain.

“The disturbance, now a potential cyclone is expected to intensify and will likely bring tropical storm and hurricane conditions as well as flooding to portions of the Lesser Antilles early next week as it tracks westward to west-northwestward near 22 mph,” the SVG Met Service said at noon on Saturday.

Rainfall accumulations exceeding 8 inches (200 mm) are possible with the passage of the system, which could trigger flash flooding and landslides.

As the system closes in on the island chain, gentle breeze Sunday afternoon should increase by evening to moderate, becoming northerly overnight. Strong breeze could increase to high wind/near gale 25-33 knots (47- 61km/h) by Monday night over portions of St. Vincent.

Strong westerly breeze is forecast for Tuesday and Wednesday as the system pulls away from SVG.

However, the possibility for tropical storm conditions exists.

Seas are expected to rise to moderate by Sunday afternoon on east coasts; with sea-swells peaking near 4 meters (13 feet) by Monday, with northerly swells by Monday evening across SVG. Breaking wave action will pose a threat to life and property within the surf zone. Large waves and dangerous rip currents can be expected, becoming more adverse at times of high tide.

All are urged to monitor the progress of this system.

All persons near river, streams and coastline areas prone to flooding and land slippage should take precautions.

Sea-bathers and other users of the sea are advised to stay out of the water during the passage of Maria.