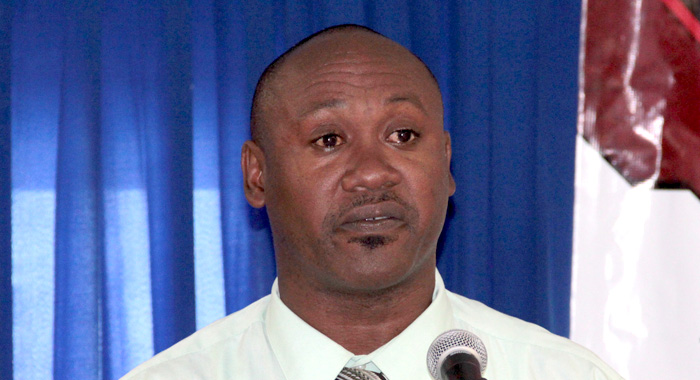 Chair of the SVG Police Welfare Association, Sergeant Brenton Smith, was informed on Wednesday that he had been deemed as having resigned his post as a police officer.(iWN file photo)

The St. Vincent and the Grenadines (SVG) Police Welfare Association (PWA) has written to Governor General Sir Frederick Ballantyne about a number of issues they have been trying to have the leadership of the constabulary address since April this year.

In a Sept. 18 letter to the head of state, President of the PWA, Sergeant Brenton Smith, said his organisation’s efforts have “proven futile”.

“For several months, we have been seeking to clarity as to whether Police officers are adequately covered by insurance when riding on police transports, especially those riding in the pan of the pickup,” Smith said.

He said the association was also trying to find out whether Coast Guard officers are covered by insurance when they travel by boat or are on active duty.

“Another issue that gravely concerns our members is the leave system which is impacting tremendously on the health, family life and well-being of our members and the continued deterioration of living and working conditions at the Police Stations,” Smith said.

“The Commissioner of Police appears to be nonchalant on these issues while our members are desperate for a change in this system.

“We are, therefore, imploring for your intervention on having these matters redressed expeditiously,” Smith told Sir Frederick.

The PWA has been trying to get definite answers on these matters since April of this year.

In a Sept. 4 response to the PWA, police chief Renald Hadaway said he could not “speak with total clarity” on the issue of whether police officers riding in police vehicles are covered by insurance.

He said in the letter that investigations are being conducted into the matter, adding that he would get back to the association at the conclusion of those inquiries.

But the commissioner’s response has been greeted with shock by one source close to the PWA, who told iWitness News that all it takes is a call to the insurance company to verify the issue of insurance coverage.

One insurance executive has told iWitness News that the police must give permission for persons to ride in the pan of trucks, and even after that permission is granted, the insurance company must agree to extend the coverage to such persons.

The practice of persons riding on the back of trucks, though widespread, came to a head in 2015, when a Sandy Bay woman, who was among persons travelling in the pan of a truck to an election rally, lost a leg when the vehicle overturned.

The insurance company compensated none of the persons who were travelling the pan of the vehicle and were injured.

In the Sept. 4 letter, the police chief also said that the Government of St. Vincent and the Grenadines provides adequate medical coverage for police personnel and “this would include personnel travelling and sustaining injuries while in police vehicles/vessels”.

The issues raised in Smith’s letter to the governor general were among those that the executive of the PWA was discussing in a WhatsApp conversation in June that was leaked, resulting in Smith and two other members of his executive being members being brought up on internal disciplinary charges.