Eustace says he will run again in East Kingstown 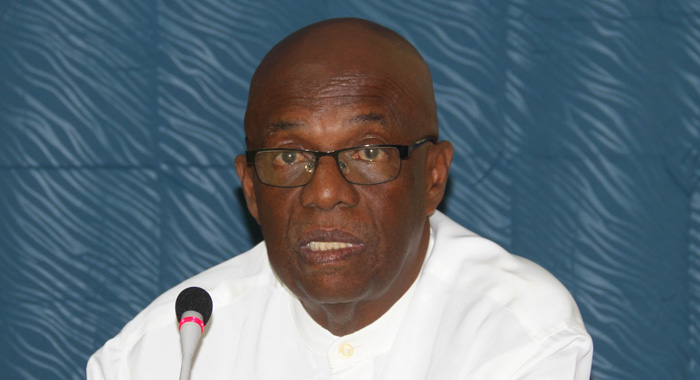 Former Leader of the Opposition Arnhim Eustace announced on Friday that he will seek a sixth term as Member of Parliament for East Kingstown, a reversal of a position he took last year.

Eustace, who turns 73 on Oct. 5, made the announcement on his party’s New Times programme on NICE Radio.

The announcement came as the host spoke about the party having had a meeting of its council in East Kingstown, a constituency which Eustace has been representing since 1998.

“It was well attended and I will call a little later to deal with that,” Eustace said of the meeting.

“What I want to say is that I announced my candidacy last night to continue in East Kingstown, but apart from that, there are other areas I discussed and I will make some mention of those later on in the programme,” he said, but did not call again as promised.

In an immediate reaction to the announcement, Prime Minister Ralph Gonsalves, speaking on Shake Up, a programme on WE FM that advocates on behalf of his Unity Labour Party (ULP), said that Eustace will lose to the ULP’s Sen. Luke Browne at the next poll.

Eustace has defeated Browne twice, although in the December 2015 election, Eustace saw his margin of victory falling for the first time since 1998, when he won by a mere 27 votes.

“The point is this is that Arnhim Eustace has been winning that seat since 1998.  He won it by a slim margin in 1998 and then he increased it and then last election he got a big reduction. So he is ripe for the pickings by Luke Browne.”

Gonsalves said he was not sure that Eustace is convinced that he can win the seat at the next poll.

General elections are constitutionally due in March 2021 but the NDP had lodged two petitions challenging the results of the last elections, which the ULP won by a single seat in a repeat of the 2010 results.

Both the NDP and the ULP are engaged in candidate selection, suggesting that they are both preparing for an early vote.

“But they’ll have a new representative in East Kingstown in Luke Browne. That would be my reading as to how matters are playing out.”

Gonsalves also used the opportunity to launch an attack on Member of Parliament for the Northern Grenadines, Godwin Friday, who took over from Eustace as NDP president and Leader of the Opposition last November.

“There are people who are telling me that Loraine Friday, he has fallen by the wayside. It’s as though people inside his own party and the people as a whole has knocked the shine off his ball. He is a new leader but no shine remains on the ball. I’ve been watching it; I’ve been observing,” Gonsalves said.

Last November, as he stepped down as NDP president and opposition leader, Eustace said he would stay on as MP for East Kingstown until his party finds a suitable replacement ahead of the next poll.

Eustace is expected to further address his decision during his weekly radio programme on NICE Radio on Monday.