After 9 months, Peters Hope resort construction yet to begin 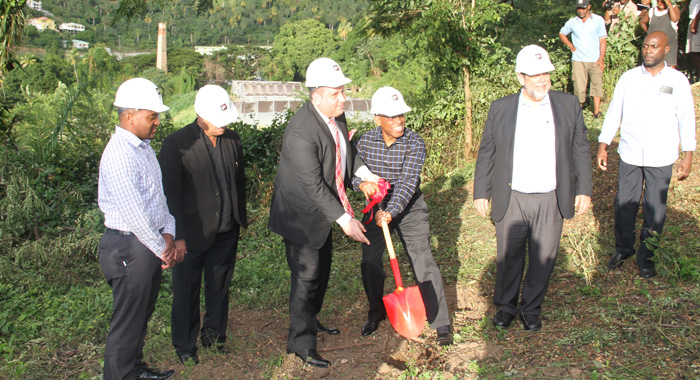 The January 2017 groundbreaking at Peters Hope for the Black Sands Resort and Villas. Joseph Romano of PACE, left, and MP for Central Leeward, Sir Louis Straker turns the sod on Jan. 19, 2017 while Prime Minister Dr. Ralph Gonsalves, right, and other officials look on. (iWN photo)

Nine months after a ground-breaking ceremony, actual construction is yet to begin on the proposed Black Sands Resort at Mt Wynne-Peter’s Hope.

Canadian firm PACE Developments has paid the government of St. Vincent and the Grenadines EC$7 million for 36 acres of land in the former agricultural estate.

An elaborate ground-breaking ceremony was held there in early January, but construction is yet to begin, Opposition Leader Godwin Friday noted in a question in parliament on Thursday.

At the ceremony, Joseph Romano of PACE Developments told iWitness News that the project was “self-financed for now”.

“There is no mortgage on the property. Cash was paid and we have a large chunk to start the service,” he said in reference to the payment of the land.

He further told iWitness News that the company had about 50 per cent of the $60 million needed to complete the project.

Friday asked Minister of Tourism Cecil “Ces” McKie to tell Parliament the reason for the delay and to state when construction of the project will start, the size of the hotel to be built and when the project is expected to be completed.

McKie told Parliament that at the ground-breaking ceremony, it was understood that the developer would have to then “mobilise several aspects in the preparation phase for the actual construction of the buildings.

“This was and still is being done,” he said.

A few months were spent clearing the site and some excavation work was done in preparation for laying of the foundation, McKie said.

He told Parliament that all this work must be considered as a major part of the construction phase and was done “under the watchful eyes of the various agencies and arms of government, as can be expected of this ULP (Unity Labour Party) administration.”

He said intense discussions are taking place “to finalise aspects of the master plan and streamlining the programmatic and schematic phases of the project.

“Mr. Speaker, it is really, therefore, not fair to say that delays have been experienced in the project, as work is on-going.”

He said the plan reflects some 40 four-to-five-room villas to be done under phased implementation — and the 200-room Black Sands Hotel.

The developer, Pace indicated that it should be built over 24 to 30 months.

“As Minister of Tourism, Sports and Culture, I am conscious of the urgent need to increase our room stock here in St. Vincent and the Grenadines, which currently stands at about 2,200,” McKie told Parliament.

He said that was evident at the opening of Argyle International Airport in February and was reiterated by the demand for rooms during Vincy Mas this year, the 40thanniversary of the festival as a summer event.

“… we were challenged with the 1,000 or so sportspersons that came into our shores in August this year as we hosted various sporting events and we may very well be challenged again from October this year to January next year, as we have chartered and scheduled flights coming to St. Vincent and the Grenadines,” McKie told Parliament.

“So, Mr. Speaker, I would be happy for this facility to be completed in the shortest possible time — of course, as we all observe the building requirements and the standards established.”

McKie also restated the government’s invitation for local and other investors in the tourism industry.

“St. Vincent and the Grenadines, we are open for business and we invite you to come in and invest in the hotel sector,” he said.

3 replies on “After 9 months, Peters Hope resort construction yet to begin”