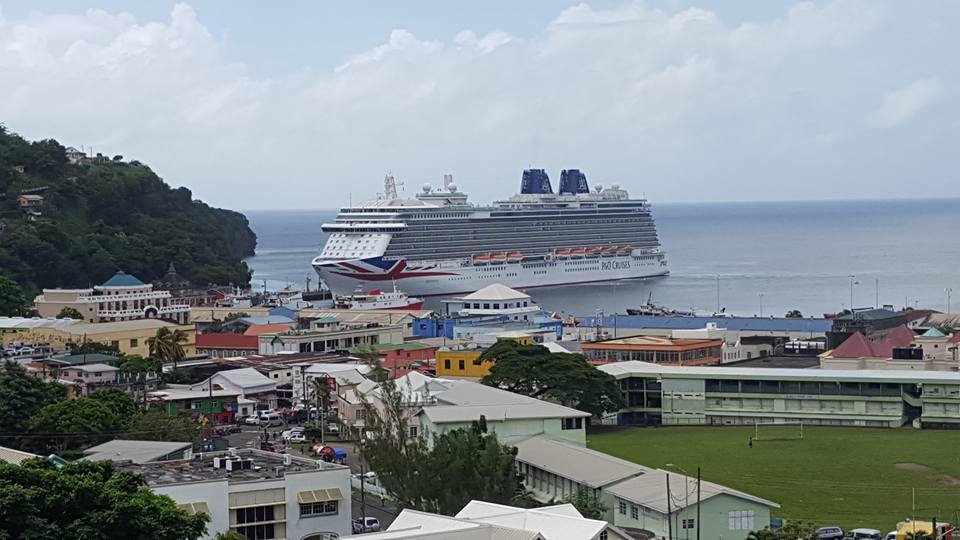 A cruise ship in Kingstown, St. Vincent and the Grenadines. (File photo by Lance Neverson/Facebook)

St. Vincent and the Grenadines is expected to receive twice as many cruise passengers this year as in 2016.

The influx, however, could put a strain on local tour operators’ ability to respond because of limited land and sea tour equipment.

“We are going to have approximately 270,000 cruise ship passengers coming in as from the 26th of this month through to the 14th of April next year,” Prime Minister Ralph Gonsalves told a press conference last week.

He, however, noted that the influx would only come is the Atlantic Hurricane Season, which officially ends on Nov. 30, does not affect the nation.

“… you always have to frame things in that light, because the season is not yet over,” Gonsalves said.

The 270,000 passengers expected to arrive in the country represent about twice the amount that came last year and about three times the 2015 figure, which was 85,000-90,000 passengers.

“So we’re seeing a ramping up. In fact, we could even have more ships with more passengers because of some of the disaster which has befallen some of the other countries,” Gonsalves said.

The prime minister said that on Boxing Day, Azura, which has a capacity of 3,400 passengers, will dock in Kingstown, while Sea Dream I, which carries 118 passengers, will drop anchor in the Southern Grenadines

That same day, Dec. 26, another big vessel with 2,600 passengers wants to come to St. Vincent on that date but there is a difficulty, Gonsalves said.

“Not that we would not be able to berth them, but because of the lack of transportation capacity on the ground,” Gonsalves said, adding that this is where the private sector comes in.

He said the country makes money by having the passengers come off, saying that among those who make money are tour guides, taxis, buses, shops, bars, and restaurants.

“The problem, though, is to provide the transportation of that large number of persons,” Gonsalves said, adding that he was discussing this with Coreas, the agent for the cruise line.

“Now, I am not making a criticism of the private sector at this moment in that regard, but as we are going to see more cruise ship passengers come in, the local business would have to respond.”

He said that there are discussions to have St. Vincent as a transport port, in which Argyle International Airport would also come into play.

“If you are going to have 14-day cruise, you are not going to find people doing 14 days, people coming out of, say, the UK. They’d do seven days. The seventh day, you finish in Kingstown. You go to Argyle and catch the charter flights from the cruise ship companies going back to the UK, but the flight would also bring passengers to take the vessel here. So you have a few of those… We have to move more assiduously to embrace what is on the horizon,” Gonsalves.

“We see already these doubling of the numbers would put a strain on the existing system that you have—the existing capacity.”

He said that the 10 school buses that the government purchased in August can be used, presumably with the “school bus” label covered, if a vessel comes in the morning and the tour can end in time for students to be picked up at 3 p.m.

“So there are these practical logistical issues,” Gonsalves said.

He said he had inquired about using catamarans to take cruise ship passengers to other places, such as Mt Wynne, but has been told that they, too, have full capacity bookings.

“It means that additional opportunities are arising.”

Gonsalves also announced that dredging will commence at the Cruise Ship Terminal to allow for two vessel to dock there.

He, however, said that the company that has won the tender was based in the British Virgin Islands and Hurricane Irma resulted in problem with their equipment.

“So that had a knock-on effect, so they are starting the dredging later.”

The work would now take place 24 hours a day to make up for lost time.

“So, hopefully, [the work would be completed] by the time the rush is coming, when you would have two vessels, which are going to be coming in on the same day at Port Kingstown, like on the 1st of November,” the prime minister said.